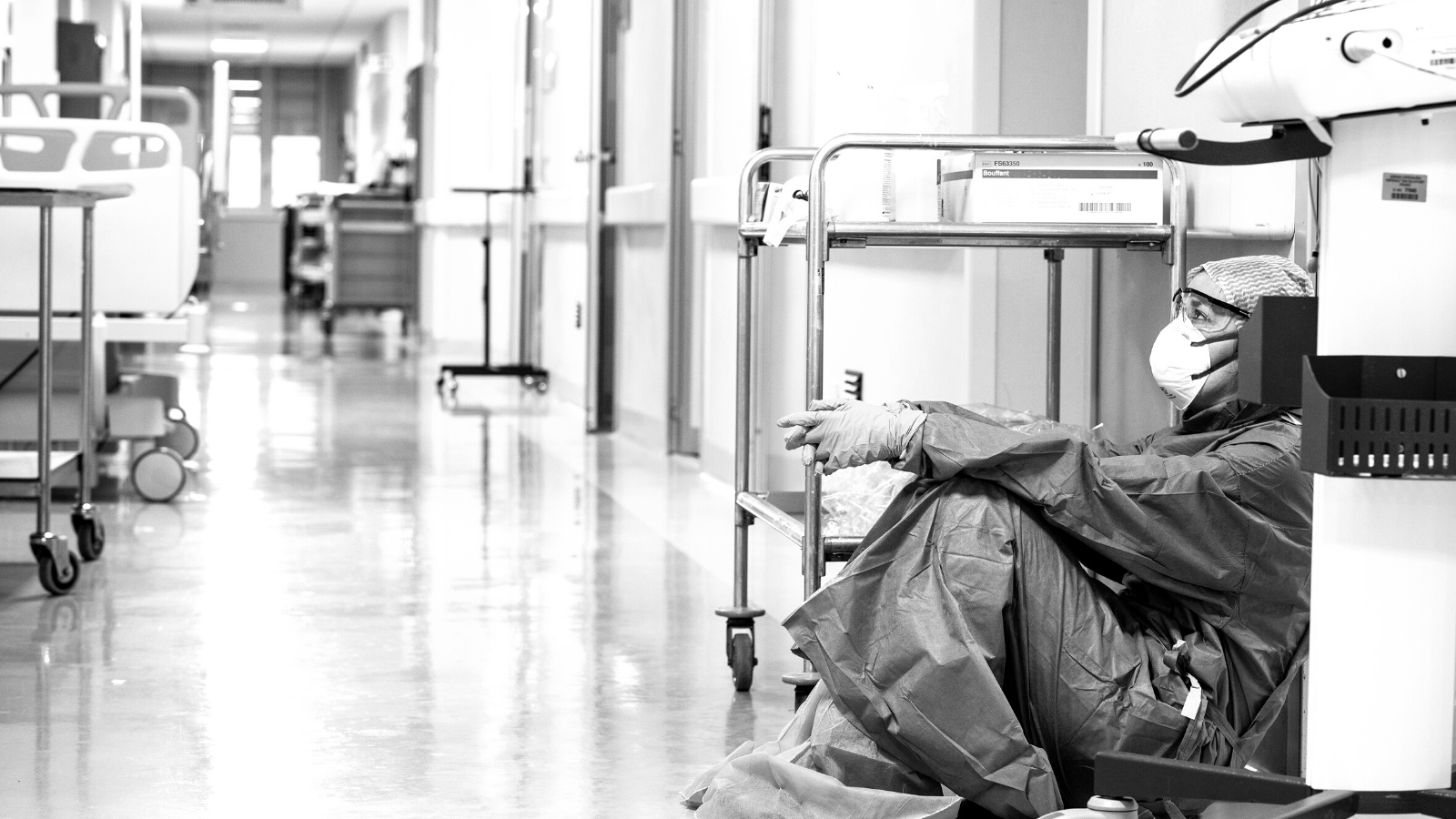 Two years into the pandemic, one in 10 nurses in North Carolina are ready to quit from exhaustion and burnout.

Katherine Guidotti has been a nurse for a year. COVID nursing is all she knows.

Guidotti graduated from the University of North Carolina-Wilmington’s nursing school in December of 2020 and started at UNC Rex Hospital in Raleigh a few weeks later.

All 18 beds in her intensive care unit had severely ill COVID patients during the first months of her career.

“People have sympathy for us, sure, but I don’t think anyone can really understand what we go through on a daily basis,” Guidotti told Cardinal & Pine last month.

COVID numbers are going down and Gov. Roy Cooper last week called on schools and local governments to end any remaining mask mandates. But while the public is eager to put the day-by-day stresses of COVID behind them, for nurses – burnt out, angry, and exhausted by surge after surge – moving on isn’t so simple.

The burden comes from so many directions. The constant ebbs and surges of patients; shortages of protective equipment; extra hours; intricate paperwork at the end of a 12-hour shift; abuse from patients or their families who think COVID is a hoax; and pay that doesn’t match the workload. And while most patients are gracious and kind, Guidtotti said, some see nurses more as waitresses, adding one more layer of stress they don’t need.

“This is nursing now,” Guidotti said.

The state had a nursing shortage even before the pandemic, and, according to a UNC study, faces an estimated shortage of nearly 12,500 registered nurses by 2033.  Some 11% of the nurses in a recent survey by the North Carolina Nursing Association (NCNA)  said they were ready to leave the profession.

Guidotti has just started her career, and she has no regrets. She loves it, in fact.  But it has already taken a toll.

“There are no words to truly explain every feeling,” Guidotti said. “It’s hard for me to see a big picture. It feels like it just keeps on coming.”

She says she is not sure how many patients she’s had to watch die over her first year as a nurse.

She wakes at 5:30 every morning for a 7 a.m. shift. Twelve to 14 hours later she heads home,  once, that is, she’s completed all the paperwork bearing a patient’s vital signs, notes of deterioration or time of death.

“I try not to think about it, but if you leave a patient on uncertain terms, it can be hard to put things down,” Guidotti said.

To protect herself from the inevitable worst-case outcomes, she tries to tell herself she did everything she could for any given patient. If something traumatic happens during her shift, which it often does, it’s important to “let yourself feel the feeling,” she said.

“You say, ‘yeah that was pretty bad but there are other people who need your help.’”

Then you walk into the next patient’s room.

Pushed to the Edge

One after another in the NCNA survey, the nurses answered questions, anonymously, about the burdens they’ve carried over the last two years.

“Work-life and home-life are falling apart because there is just not enough of me to go around,” one wrote.

“Crying frequently, not eating,” wrote another. “Angry a lot, tired all the time, don’t enjoy anything.”

Another: “Draining, loss of hope, loss of faith in humanity.”

Another: “We’re drowning out here.”

The survey, conducted in early February, collected responses from 229 nurses from hospitals, emergency rooms, doctor offices and other healthcare settings.

The burnout is real, but is not new. Similar studies, surveys and social media posts across the country have been showing the same strain almost from the start.

“You’re fighting this invisible giant and figuring it out in real-time,” Meka Douthit El, the president of the North Carolina Nurses Association, told Cardinal & Pine in January.

With the Omicron surge, she said, a 12-hour shift could easily turn into an 18-hour shift and nurses who may handle three patients on a normal day often had to tend to seven.

Caring for more patients is hard enough. But these patients were sicker, too.

“I’ve been a nurse for 25 years and the patients we were seeing were the sickest of the sick,” said Douthit EL, who is also a director of nursing at Moses H. Cone Memorial Hospital in Greensboro.

The Omicron variant may be less severe overall than the Delta variant, but when every hospital bed is full, such details don’t really matter.

“North Carolina’s healthcare workforce has been asked to do more than should be expected,” the NCNA said in a news release announcing the survey, “and further escalation could result in a mass exodus that the healthcare system is not prepared to absorb.”

The association called on elected officials and hospital administrators to find ways to ease the burdens, retain nurses, and ensure a “healthier workforce pipeline.”

To start, the group suggested, North Carolina nurses need to be better paid.

“In over 30 years of nursing, I have never been this stressed,” a survey respondent wrote. “I want to retire but I can’t financially do it.”

Nurses at rural hospitals make $70,000 on average nationwide, but they make an average of  $55,000 in North Carolina, according to the employment company ZipRecruiter.

That’s about $26 an hour. Traveling nurses, however, can make up to four times as much. Many nurses have left hospitals for the traveling circuit, further straining both the facilities and former colleagues they leave behind.

Hospitals then often use traveling nurses to fill the staff shortages, meaning the substitutes can work alongside the hospitals’ fixture nurses and get paid so much more for the same day’s work.

North Carolina pays its rural nurses less than 32 states in the US, ZipRecruiter says.

‘That All Falls on the Nurses’

North Carolina’s ICU beds were so full of patients during all of the pandemic surges that hospitals frequently delayed care for serious non-COVID illnesses and converted unrelated facilities to COVID wards. Nurses navigate these endless streams of new patients coming into the emergency room, and deal with aggression from patients and their families unhappy with the waits.

“That all falls on the nurses,” Douthit El said.

And, she said, nurses have to face the pandemic outside the hospitals, too.

Supply chain disruptions, teacher and school bus driver shortages, canceled classes for school kids, it’s not like being on the front lines of the disease absolves them of living with the pandemic like everyone else.

It makes caring for one another as important as taking care of their patients, Douthit El said.

“We try to round on each other, check-in and ask how are you,” she said. “Sometimes you don’t even know what you need.”

The little kindnesses aren’t miracle cures, she said, but they make a difference, especially when the nurses can let themselves just stop for a minute and tend to themselves.

“Take a small break,” she said, “grab a snack, and just keep on going. Stop somewhere where you can safely take off your mask and see and breathe.”

Nurses were doing their best to rise to the expectations exceeding any mortal reach.

“Nurses are doing a wonderful job leaving all of that stuff behind and focusing on what needs to be done,” she said. “I am so proud of being a nurse.”

‘Something Has Got to Give.’

Both Douthit EL and Guidotti said that the strains of the pandemic are part of the job and are what they signed up for. Both said they loved their jobs.

But while the Omicron surge may be over for now, there are reports that an even more contagious subvariant has been found in North Carolina, so the next surge could be right around the corner.

“People can only go so long under this kind of pressure, and nurses have been doing this for far too long,” Tina C. Gordon, the NC Nurses Association’s CEO, said in the survey press release.

“Something has got to give,” Gordon wrote.

“It’s almost like you’re a sponge, and you’re totally full and trying to take in more,” she said.

Like a sponge. Or like a dam. With too much pressure and a system designed for far less water, even the strongest dam can break.