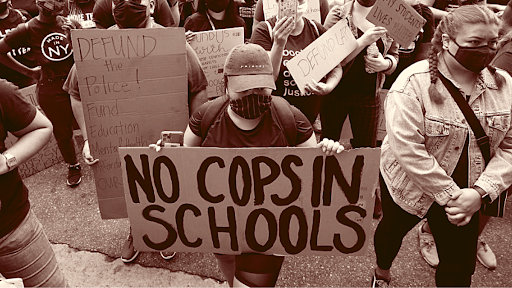 Demands to keep schools safe after the mass shooting at a Texas elementary school have triggered a call for police presence in schools, but students are demanding the exact opposite.

For some students, having police on campuses does the exact opposite of providing safety, especially for those whose communities have been directly affected by the killings of their loved ones.

Last year, police killed Andrew Brown Jr. in Elizabeth City while trying to serve warrants. Just this year, in the presence of his kids and wife, the police killed Daniel Turcios, a man who was a victim of a car accident in Raleigh, and four months later police killed Reuel Rodriguez-Nunez, who had just experienced a mental health crisis.

It is no surprise then that so many students feel uneased by having police officers in schools, but the unease is not only ignited by things students see or hear on TV. Since 2020, a group of students have been pushing for the removal of police officers from school campuses and advocating for more funding for school counselors. According to the Associated Press, Malika Mobley, a high school senior and President of the Wake County Black Student Coalition, witnessed on her way home from school police officers detaining some of her classmates, who were being pushed into a police vehicle. She mentioned that they were crying and begging the officers to stop. “They were crying, ‘Why are you doing this to me? I didn’t do anything,’” Mobley said.

Police presence in school is not a solution in the students’ eyes. Too many tragedies are perpetuated by the police, which causes marginalized people to not feel safe around police. In Mobley’s own words, “we don’t see police presence as part of the solution.”

School Resource officers have the responsibility to build relationships and trust with young students, however, Black and Brown students are more likely to have a negative interaction with police officers, said Katherine Dunn, Director of the Opportunity to Learn program at the Advancement Project. According to the Advancement Project, since 2007 there have been 200 cases of police officers assaulting students.

A study of the law’s impact by Professor F. Chris Curran at the University of Florida found that when there is more police in schools, there are more arrests and more reported behavioral incidents. Professor Curran mentioned that there is a need for a deep conversation about the benefits, but also the unintended consequences, of having police in schools, and about the potential increase in student incarceration and racial disparities.

Having police in schools doesn’t always guarantee there will not be violence or guns in schools or that the officers will stop the perpetrator. A clear example is the newly found guns at a Charlotte-Mecklenburg campus last week. There were yet two more guns found this time, raising the number to 30 guns found this year, surpassing the 22 found last year. The implementation of body scanners at high school entrances and anonymous reporting system to denounce potential risks was not enough to bring down the amount of guns brought to school, and actually coincided with the return to in-person classes and with the surge in teen-related gun violence.

The National Association of School Resource Officers highlighted the importance of having “a carefully selected, specifically trained SRO on its campus whenever school is in session,” but at the same time rejected criticism that having armed police on school campuses repeatedly results in Black and brown students being disproportionately arrested and punished, leading to the school-to-prison pipeline.

Like most of the country after the incidents in Texas, North Carolina is also increasing the amount of officers in schools, something that the campaign led by The Wake County Black Student Coalition wants to change. This goal didn’t come out of nowhere, but in fact started with stories they heard from students.

Chalina Morgan-Lopez, a high school senior and co-President of the student group mentioned an incident from 2017 where an SRO officer was filmed lifting up a young Black girl and slamming her to the ground. Morgan-Lopez told the Associated Press, “I think it’s a reasonable response to want more officers in schools, especially from people who genuinely do feel protected by law enforcement, even though that’s not my lived experience,” Morgan-Lopez said. “But I think people need to take into account… that officers do in fact do more harm than they do good.”

At the end of the day, although the gun problem can be seen from different angles, the lives of Brown and Black students are always at the forefront of the issue. They are the victims of both the perpetrators of gun violence at schools, and of the failed but continued policing solution that creates unintended consequences, such as increased racial disparities and teen incarceration. Young people are no longer quiet and they are seeing the problem clearly – imposed force is not the solution, but the problem.

Let’s hope gun-loving state lawmakers will soon come to that realization as well.