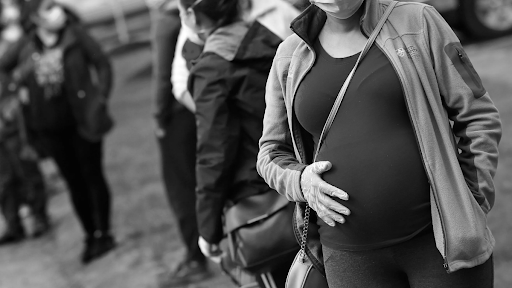 Over the past decade, maternal mortality statistics in the United States have worsened as women and childbearing people increasingly experience life-altering health challenges, such as heart issues, hemorrhages, seizures, and blood infections.

During the first year of the COVID-19 pandemic alone, the rate of women who died during pregnancy or shortly after birth increased significantly, according to the National Center for Health Statistics.

Black women continued to experience maternal death at rates more than twice the national average. According to the Centers for Disease Control and Prevention, Black women and childbearing people are three to four times as likely to die of pregnancy-related complications than white people.

These statistics alone paint a troubling picture surrounding the disparities within maternal health care around the U.S., and in North Carolina.

The high maternal mortality rates amongst communities of color is also compounded with the lack of access to quality health care.

Since 2014, 13 rural maternity units in North Carolina have closed, according to N.C. Health News.

In addition to closures, much of western North Carolina and counties within the Triad are designated as maternity care deserts or have low rates of maternity care due to no hospitals providing obstetric care,  birth centers, OB/GYN specialists and certified nurse midwives.

“We need to provide services where people live,” stated Ellen Hearty, a OB/GYN from Mission McDowell in an interview with N.C. Health News. “And the problem is that maternal health and labor and delivery and neonatal services are just undervalued in this country. They’re not financially supported. And so, until that changes, nothing’s gonna change.”

Raising the alarm around maternal mortality

State legislators have proposed pro-maternal care and reproductive laws in the past few years that would address many of these longstanding issues; one being Medicaid expansion, which would expand access to affordable health care.

In 2021, a report found that Medicaid expansion significantly reduced the number of maternal deaths relative to non-expansion states, with the greatest decreases in mortality rates among Black, non-Hispanic women and Hispanic women.

Another being a sweeping bill package collectively known as the North Carolina Momnibus Act, which aims to combat these disproportionately high rates of maternal mortality among Black women.

The SAVE Act, which is supported by both Republican and Democratic lawmakers, could lower health care costs and allow advanced practice registered nurses to practice without physician supervision; helping to expand nurses in parts of the state that need it.

Yet, with prominent Republicans leaders and red states pushing forth bans or limiting reproductive health access, millions will be impacted as a system that already lacks support, funding and medical personnel will be further strained.

With the U.S. suffering from a prolonged maternal health crisis, public health leaders have sounded the alarm about the anticipated rise in maternal deaths if critical reproductive health options, like abortion, are stripped away.

Dr. Amy Addante, an OB-GYN in Illinois and a fellow with Physicians for Reproductive Health stated in an interview with NBC News, “My biggest concern right now is seeing an already very marginalized population pushed even further to the brink in terms of their ability to access reproductive health care.”