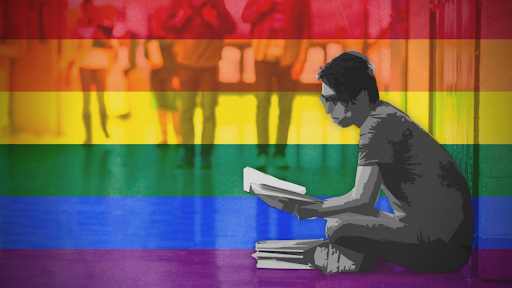 State Republicans are attempting to quickly move their newest piece of anti-LGBTQ legislation, House Bill 75, the “Don’t Say Gay” bill, through the NC General Assembly, as parents, students, and advocates continue to voice concern over the discriminatory bill. The discriminatory bill is just one of many proposed measures that have blatantly targeted students, along with educators, in the past few months.

Last month, a teacher in Wake County resigned amid Republicans’ uproar over LGBTQ flash cards that were on display on a bulletin board on her classroom wall. The teacher’s resignation spawned a community outcry, with a Wake County Board of Education member defending the LGBTQ-themed cards on display in the Fuquay-Varina classroom.

“The saddest thing is our children lost the most incredible teacher. It’s just awful for them,” stated Jackie Milazzo, whose child is in the teacher’s preschool class, in an interview with IndyWeek. “She has changed so many children’s lives. Who my son was at the beginning of the school year, he’s grown in ways that we could have never even dreamed of …. The parents that I’ve spoken to are absolutely devastated.”

As Republicans continue to lead a campaign to criminalize teachers and demonize students, many educators across the state may find it difficult to stay in the profession. According to a recent survey, thousands of North Carolina teachers are planning to quit this summer, with many relaying the issues of being overburdened during the pandemic, classrooms being under-resourced and stingy pay increases.

For decades, state Republicans have failed to properly fund public schools — leaving bottom-of-the-barrel funding towards schools and wages for educators. On top of bills aimed at censoring classrooms, banning books and attacking LGBTQ+ students, these divisive laws are fueling crippling staff shortages in schools and preventing students from learning in safe environments.

The introduction of House Bill 755  has already made schools feel unsafe for LGBTQ educators, students, and families across the state. The bill aims to erase LGBTQ+ voices from school curriculum, puts a target on our already under-resourced educators, and requires mandatory reporting to parents if a student, regardless of grade, begins to question their sexual identity in school.

“This has been a long game from our conservative opposition, actually manufacturing problems in order to solve them,” stated Kendra Johnson, executive director of Equality NC in an interview with IndyWeek. “There’s always a wedge issue that’s thrown out in election years. This is part and parcel of a strategy to elevate a nonexistent issue, propagate a cultural war, and then create some solution.”

Despite Americans making it clear that they reject the idea of banning books about history or race, and disagree with Republican’s campaign to censor classrooms, Republicans across the country, and in North Carolina, are using bills like the“Don’t Say Gay” bill and various other censorship bills to use divisive policies as a winning political strategy.

As of now, House Bill 755, which passed the state senate, is headed to the house for a vote. If passed, it would go before Governor Roy Cooper, who will likely veto the discriminatory bill.