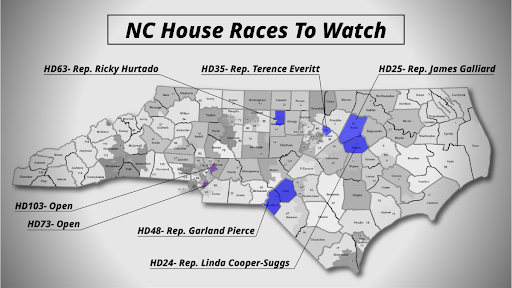 2022 is set to be one of the most pivotal legislative elections in North Carolina history. In the wake of the United States Supreme Court overturning Roe v. Wade, the fate of safe, legal abortion access is in the hands of the state courts and state legislature. Based on this precedent, candidates elected to the state legislature will be poised to dictate the law on a number of issues previously enforced at the federal level.

Republicans currently control both chambers of the North Carolina General Assembly. However, since 2018 Democratic Governor Roy Cooper has had the ability to veto legislation and there are enough Democratic members in the legislature to block Republicans from overriding a veto.

The stakes are incredibly high in this year’s legislative elections and a handful of races could decide the future of our state. In the state House, the following seats are considered races to watch this fall based on a number of factors including historical electoral performance, candidate profile, and demographic information.

Note- these are analyses, not endorsements. This report shouldn’t be taken as an indication of support of any one candidate.

In House District 24, Democratic Representative Linda Cooper-Suggs is running for reelection against Republican nominee Ken Fontenot. Rep. Cooper-Suggs has served in the North Carolina House since 2020 and is a former teacher. Republican candidate Ken Fontenot is a pastor and marine corps veteran.

In House District 25, Democratic Representative James Galliard is running for re-election against Republican nominee Alan Chesser. Libertarian candidate Nicholas Taylor is also on the ballot. Rep. Galliard is a pastor and community leader and has served two terms in the North Carolina House of Representatives. Republican candidate Alan Cheeser is a combat veteran, former law enforcement officer, and Chairman of the North Carolina Republican Liberty Caucus.

In House District 48, Democratic Representative Garland Pierce is running for re-election against Republican nominee Melissa Swarbrick. Rep. Pierce is a baptist minister and he previously served in the army. Rep. Pierce has served nine terms in the North Carolina House of Representatives. Republican candidate Melissa Swarbrick is a community leader and farm owner in Hoke County.