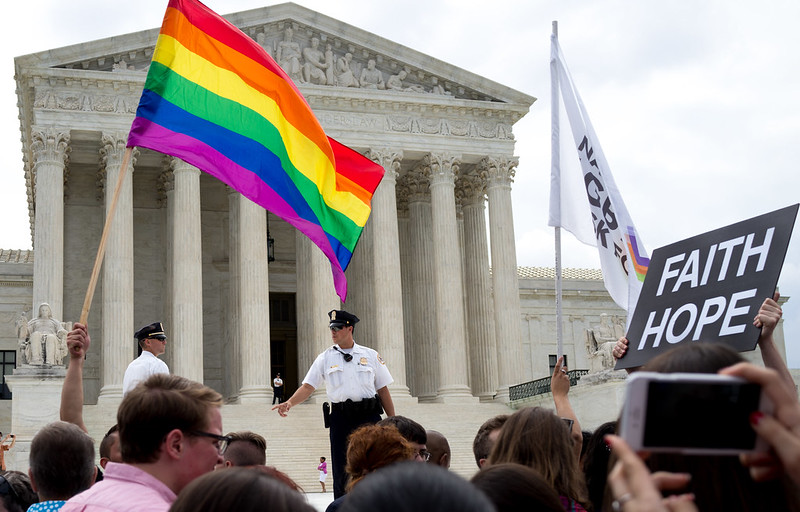 The U.S. House passed a bill Tuesday recognizing same-sex marriages at the federal level – but, unsurprisingly, all eight House Republicans from North Carolina voted against it.

The Respect for Marriage Act passed the House with a 267-157 vote. Every House Democrat, including the five from North Carolina, voted in favor of the bill, which repeals the 1996 Defense of Marriage Act (DOMA).

DOMA prevented the federal government from recognizing same-sex marriages as well as all the rights that go along with getting married. In addition to repealing DOMA, the Respect for Marriage Act also requires that states legally recognize same-sex and interracial marriages from other states.

The move to codify these rights comes in response to the Supreme Court’s ruling that overturned Roe v. Wade and the concern that many have regarding other constitutional rights (same-sex marriage, freedom to have consensual sexual relations with a member of the same sex, access to contraceptives, etc.) that could be next on the high court’s chopping block.

While speaking on the House floor, Tennessee Democratic Rep. Steve Cohen put the onus on Republicans to prove they weren’t homophobic and they respected the constitutional right of same-sex couples to get married.

“[The bill] simply says each state will recognize other states’ marriages and not deny a person the right to marry based on race, gender, sexual orientation,” he said. “The only reason to be against it is because you really don’t want to go on record as being in favor of those rights.”

Despite Cohen’s simple message, only 47 Republicans stood with Democrats to make sure that the rights of same-sex couples don’t get thrown out.

Among the eight North Carolina representatives to vote against the bill was right-wing extremist U.S. Senate candidate Rep. Ted Budd.

Budd, a man who has never done the correct thing when it comes to LGBTQ+ rights, racial justice, gun control, respecting democracy, reproductive rights, or supporting middle and working-class North Carolinians, will once again find himself on the wrong side of history.

Democratic candidate Cheri Beasley, who is running against Budd, quickly hammered Budd for his vote and threw her support behind the bill on Twitter.

“Ted Budd just voted against protecting our constitutional freedoms. Again. This time, he voted against legislation to protect same-sex and interracial marriage,” she wrote. “With our rights at risk, we owe it to families to defend their right to marry the person they love. Love is love.”

The bill will now head to the U.S. Senate where it will need 60 votes to pass – and its prospects look surprisingly promising after a number of lawmakers told CNN that they expect some Republicans to support the bill.

Among the Republicans who are expected to support the bill is one very shocking name – North Carolina’s Thom Tillis.

Tillis told CNN’s Manu Raju on Wednesday that he “probably will” support the bill. Marriage equality and Thom Tillis have probably never been mentioned in a sentence together in a positive way before now. In 2012, while serving as North Carolina’s House Speaker, Tillis strongly supported a same-sex marriage amendment that banned same-sex marriage in the state constitution. The bill was passed by voters but overturned two years later.

All 50 Democrats in the Senate have signaled that they will support the bill, meaning they will need 10 Republican votes due to the filibuster rule.

In addition to Tillis, Republican senators Rob Portman of Ohio, Susan Collins of Maine and Lisa Murkowski of Alaska have also said they will likely vote for the bill. North Carolina’s other senator, Richard Burr, along with senators Pat Toomey of Pennsylvania, Dan Sullivan of Alaska and Todd Young of Indiana, would not commit to voting for the bill when questioned by CNN.

“As you saw there was pretty good bipartisan support in the House [Tuesday] and I expect there’d probably be the same thing you’d see in the Senate,” he told CNN.

John Cornyn of Texas, Lindsey Graham of South Carolina and Marco Rubio of Florida – told CNN they will vote against the Respect for Marriage Act.

In fact, CNN reported that Rubio called the bill “a stupid waste of time” as he entered an elevator with Wisconsin Democratic Sen. Tammy Baldwin, the first gay person elected to the U.S. Senate.

Senate Majority Leader Chuck Schumer of New York has not set a date for a vote on the Respect for Marriage Act.

Here is the vote breakdown for North Carolina’s representatives in the House: