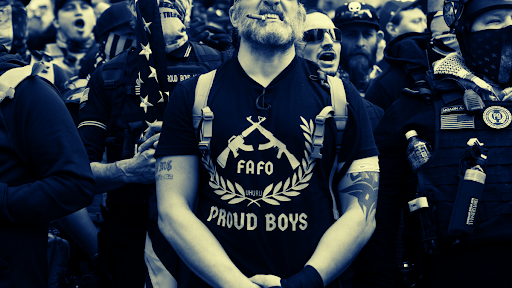 There is now an update surrounding an incident that occurred in June when a group of Proud Boys showed up at a public library in Wilmington to protest a Pride Month children’s reading event – and it involves North Carolina Lt. Gov. Mark Robinson and local pastors.

According to Wilmington television station WECT, the June 21 event that resulted in grown men yelling obscenities at families included staff reading the books “Daddy and Dada” and “Heather Has Two Mommies,” plus an art activity where kids could make their own family picture frame.

WECT spoke with one of the people who showed up at the Proud Boys protest at Pine Valley Library but, according to the protester, he has no affiliation with the hate group.

Tim Russell told the TV station that he’s a pastor at a church in Carolina Beach and that he joined up with the Proud Boys at the library because he and other Christians “have been inspired” by North Carolina’s homophobic, transphobic, gun-loving, misogynistic, anti-Semitic lieutenant governor.

“The awareness that Mark Robinson has opened up has really put the Christian society and the Christian group, as far as the ones I associate with, on a higher alert, you know, to be more aware of these things, to make sure that we’re being quote, unquote, watchdogs for our children,” Russell told WECT. “The material that these kids are being presented with is inappropriate in our schools and in our libraries. So, to be one to stand here and to have a discussion with people on the other side and say, ‘Hey, I disagree, and this is why,’ and be kind and gentle, that’s the way it should [be], that’s what a peaceful protest is.”

Russell may have thought what he was doing was taking part in a peaceful protest, but the families who were there for the storytime reading certainly felt differently.

“…when a group of known violent people, you know, at that point when those people show up and they’re coming into the library and trying to disrupt the storytime. That’s when I felt unsafe and that’s where I felt it was not held appropriately,” said Emily Jones, who attended with her 1-year-old daughter. “And they’re doing that on purpose for sure to intimidate people.”

Following the incident, the Cape Fear Proud Boys released a statement saying that “Pride events nationally have experienced a shift in focus from celebrating two consenting adults to introducing sexuality to small children” and that “As concerned citizens, we will continue to utilize our first amendment rights to ensure that public events for children are age appropriate.”

There’s not actually any evidence that Pride events “have experienced a shift in focus…to introducing sexuality to small children” but it’s not hard to figure out where they would have gotten that idea – all one needs to do is refer back to Russell’s “inspiration.”

Robinson has only been involved in state politics for a few years but he has fit a lot of hate into just a small amount of time. He is known to rarely, if ever, back down from his statements and he takes pride in saying horrific and offensive things that he knows will rile people up and get him media attention. He loves doing it and his supporters seemingly love it when he does it.

One thing that’s so interesting about Robinson is that he considers himself a man of God and yet, more often than not, the disgusting things that he says are said in churches throughout North Carolina.

Perhaps Pastor Russell has been in attendance at one of Robinson’s hate sermons and that’s where he got his anti-LGBTQ ideas from.

Robinson made international news in October 2021 after a video of his June speech at Asbury Baptist Church in Seagrove was released online, showing him going on an anti-LGBTQ tirade, likening gay and transgender people to “filth.”

In his sermon, Robinson said, “There’s no reason anybody anywhere in America should be telling any child about transgenderism, homosexuality, any of that filth … And yes, I called it filth, and if you don’t like that I called it filth, come see me and I’ll explain it to you.”

That kind of response is exactly what he was hoping for when he said it because it then allowed him to defend himself as though he was the true victim. Playing the victim is of course a favorite past-time for right-wing extremists.

The comments he made at that church in Seagrove were hardly the first, or the worst, comments he’s made regarding the LGBTQ community.

Robinson’s Facebook page is a treasure trove of posts that would get the average person fired from their job over.

In the wake of the 2016 Pulse nightclub shooting that left 49 dead and more than 50 injured in Orlando, Florida, Robinson wrote on Facebook, “I pray for the souls of all those killed, healing for all those wounded, and comfort for the family members of the terrorist shooting in Orlando. However, homosexuality is STILL an abominable sin and I WILL NOT join in ‘celebrating gay pride’ nor will I fly their sacrilegious flag on my page.”

A few months later, Robinson attacked National Geographic magazine over their cover story called “Gender Revolution” that showed a young transgender child, writing, “The sick, deranged, sexual degenerates who promote this type of demonic behavior are the ones who will take the next step in our continuing moral decline toward total depravity. Free love, then homosexuality.”

In 2017, Robinson took to Facebook to once again criticize the LGBTQ community, writing “You CAN NOT love God and support the homosexual agenda.”

In 2019, Robinson complained about gender reassignment surgeries and said that parents “mentally raped” their transgender children. Later that same year he also complained about people who called the new Rambo movie too “manly” and said they “are the same people who think it’s okay for the homecoming queen to BE a man.”

Those are just a few examples of the awful things Robinson has said – and they only cover some of what he’s said about the LGBTQ community. The amount of hate that the lieutenant governor has to spread around is really quite disturbing.

As the saying goes, politics makes strange bedfellows. Who knew that a simple Pride Month storytime event at a library could show how strong a connection there is between eastern North Carolina pastors, a violent hate group and North Carolina Lt. Gov. Mark Robinson?