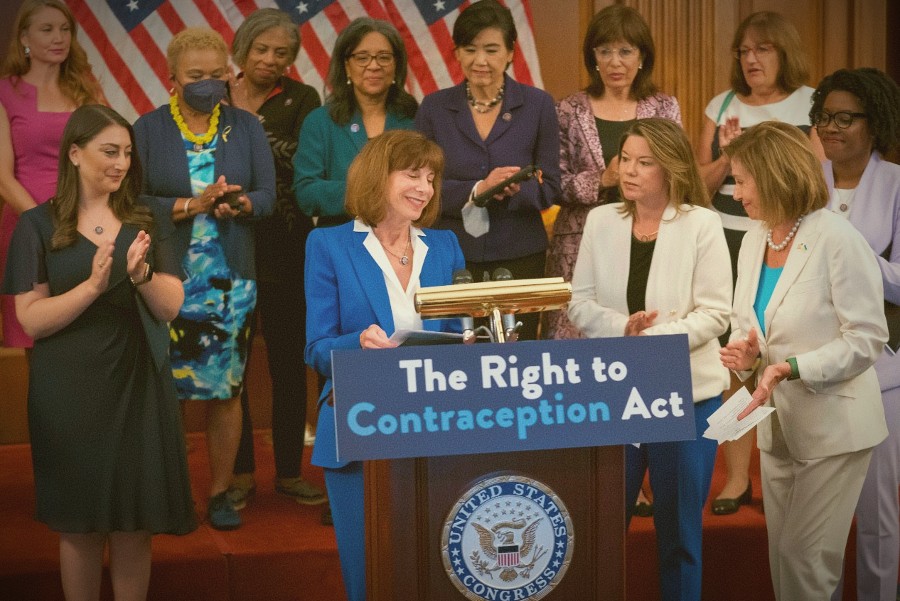 Just a few days after the U.S. House of Representatives voted to codify same-sex and interracial marriage at the federal level, the House passed a bill on Thursday to guarantee access to contraception.

The Right to Contraception Act, which was introduced by Rep. Kathy Manning, a Democrat who represents North Carolina’s 6th Congressional District, was passed by a final vote of 228-195.

Eight Republicans crossed the aisle and voted in favor of the bill along with every Democrat, according to CNN. In comparison, 47 Republicans (although none from North Carolina) voted with Democrats to pass the Respect for Marriage Act earlier in the week.

The move to codify these rights comes in response to the Supreme Court’s ruling that overturned Roe v. Wade and the concern that many have regarding other constitutional rights (same-sex marriage, freedom to have consensual sexual relations with a member of the same sex, access to contraceptives, etc.) that could be next on the high court’s chopping block.

CNN reported that the White House “strongly supports” Manning’s bill and said that “access to contraception is essential to ensuring all people have control over personal decisions about their own health, lives, and families.”

Manning wrote the bill in order to protect the rights granted by the Supreme Court’s 1965 decision in Griswold v. State of Connecticut, which made it a constitutional right of women and couples to purchase and use birth control without penalty from the state. Some states, including Connecticut, used to ban women and couples from using birth control.

Recent polls show that 90% of all Americans support legal access to birth control and/or condoms in “all” or “most” cases and 81% said the same regarding IUDs.

In an interview with WGHP after her bill passed, Manning told the TV station that she wasn’t shocked by the lack of support from Republicans, saying it was “not the least bit unexpected but disappointing to American women because we know millions of American women use contraceptives.”

Manning went on to say that her bill shouldn’t be a partisan issue because “96% of American women will use contraceptives at some point in their life. That includes women who are Democrats, women who are Republican, women who are independent, and women who have no political affiliation and really don’t pay attention to politics.”

The congresswoman pointed out that, based on their speeches, many of the Republicans who spoke out against her bill didn’t even read it.

“They’re pushing fake science about how contraceptives actually work. The main argument that they are trying to make is that this is about abortion and not contraceptives,” Manning said. “They are conflating abortion with preventing unintended pregnancy. It’s a false equivalence.”

WGHP reached out to the offices of Budd, Foxx and Hudson for comment. The TV station did not receive a response providing an explanation for why the representatives don’t believe that people should have access to contraception.

Budd, the Republican candidate for North Carolina’s open U.S. Senate seat who also voted against the Respect for Marriage Act and a House bill that would restore abortion rights nationwide, has not provided any explanation for any of his recent votes on these highly important reproductive rights issues.

Cheri Beasley, the Democratic candidate for the Senate, sent out tweets criticizing Budd’s vote and praising Manning for her efforts to get the bill passed.

“The House passed the Right to Contraception Act with bipartisan support – and Ted Budd voted against it,” she said. “In the last week, Budd is 0 for 3 in protecting our constitutional freedoms.”

Beasley followed up that tweet with one thanking Manning.

“Thank you to [Kathy Manning] for your leadership on this issue, and for always being a champion for women in Congress,” she wrote.

Beasley also sent a statement to the press hitting Budd for his continuously terrible positions on issues of constitutional freedoms.

“Congressman Budd’s vote against protecting access to contraception is just the latest reminder that he will stop at nothing to strip North Carolinians of our freedoms,” she said in her statement. “Americans have a constitutional right to make decisions about their own bodies and families – without government interference – and the Senate should act swiftly to protect this fundamental freedom.”

Sens. Mark Warner and Tim Kaine, both Democrats from Virginia, filed a companion bill in the Senate.

It’s not known at this time when the Senate will hold a vote on the bill or what chances it has of getting passed since it will need 60 votes to clear the filibuster threshold.