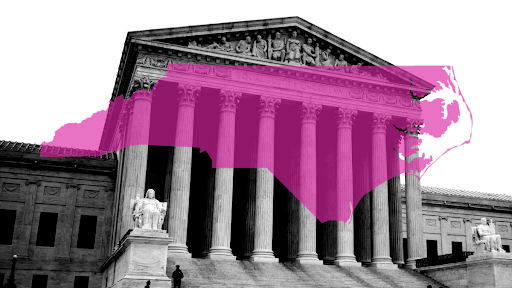 If the U.S. Supreme Court’s decision to overturn Roe v. Wade on June 24 wasn’t horrifying enough, several days later they agreed to hear a case out of North Carolina that could lead to state legislatures deciding who gets elected, NPR reported.

The case, Moore v. Harper, highlights what is “a fringe legal theory about how much power state legislatures have over the running of congressional and presidential elections,” according to NPR.

The case deals with newly drawn voting district maps for North Carolina’s 14 congressional seats. Republicans are upset because North Carolina’s state courts struck down their partisan and racist gerrymandered maps and came up with their own court-drawn map that will be used for this November’s midterms.

The North Carolina Republican Party wants to bring back the overturned map – a map so gerrymandered in favor of the GOP that courts ruled Republicans in the legislature “violated multiple provisions” found in the state’s constitution by giving Republican candidates “an unfair advantage.”

The NCGOP, led by House Speaker Tim Moore, appealed the ruling to the Supreme Court, arguing that “the U.S. Constitution’s Elections Clause gives state legislatures the power to determine how congressional elections are conducted without any checks and balances from state constitutions or state courts.”

This belief is called the independent state legislature theory and Republicans are arguing that the state courts’ decision to throw out the maps drawn by the legislature violates the U.S. Constitution. According to NPR, this argument “radically departs from the U.S. Supreme Court’s historical record of deferring to state courts on how state constitutions and laws should be interpreted.”

Republicans made an emergency request in March for the U.S. Supreme Court to rule on the case, but the court decided against it. In a dissenting opinion by Justices Clarence Thomas, Neil Gorsuch and Samuel Alito, the three men said they would most likely side with the NCGOP on the independent state legislature theory.

The endorsement of such an outlandish theory by one-third of the high court has legal scholars terrified about the potential consequences across the nation for congressional and presidential elections.

“It would be extremely disruptive,” Carolyn Shapiro, a law professor and founder and co-director of Chicago-Kent College of Law’s Institute on the Supreme Court of the United States, told NPR. “It would allow the possibility that people who don’t like state supreme court rulings that have been on the books potentially for years could step back in and say, ‘Well, actually, that ruling only applies to state elections.'”

Shapiro further explained that using the independent state legislature theory could result in difficulties when holding elections for different levels of government – election officials would possibly need to have different sets of ballots for different elections, a different voter registration system, and for states where it exists, different voter ID laws.

An embrace of such a theory could also potentially blow up how the 2024 presidential election is run.

Dean of the University of Illinois College of Law, Vikram Amar, told NPR that a “hyper-charged” version of the independent state legislature theory focusing on the U.S. Constitution’s Electors Clause was actually the backdrop for the “fake electors” scheme that is being investigated by the Jan. 6 House select committee.

Amar warned that, depending on how the Supreme Court rules in the North Carolina case, the next presidential election could be impacted by the court’s support for the theory.

For example, states with Republican-controlled legislatures (such as North Carolina) could interpret the ruling as permission to set new rules for elections that would take power away from voters when picking electors for the Electoral College – or in a worst-case scenario, allow state lawmakers, not the courts, to be the judges in any election disputes.

“It is really a grave danger to American democracy to say that state legislatures are free from state constitutions to do whatever they want,” Amar, who co-wrote an article for the Supreme Court Review at the University of Chicago about how the theory goes against an originalist understanding of the U.S. Constitution, told NPR. “State constitutions are an important source of American democracy, limits and rights. And I think it would be terrible if the U.S. Supreme Court distorted federalism to reject that very important premise.”

Shapiro told NPR that the theory “doesn’t make any sense at all.”

If the Supreme Court rules in favor of Moore, we could see a 2024 presidential election where the Democrat wins the popular vote in North Carolina but the Republican-controlled legislature decides the result should be disputed. After “investigating” the vote tally, Republicans in the legislature rule that the Republican candidate was actually the winner and should be awarded the state’s 15 electoral votes.

This probably sounds unrealistic and alarmist to some, but it could very well be the future of elections in North Carolina and across the country.

The truly alarming thing is that we now need to have faith in the Supreme Court to rule against Moore in this case – and the court’s recent history should not give us much hope.