Ted Budd Has Questions To Answer About His Gun Business, Lavish Trips Paid For By Outside Groups

Home » Politics » Ted Budd Has Questions To Answer About His Gun Business, Lavish Trips Paid For By Outside Groups 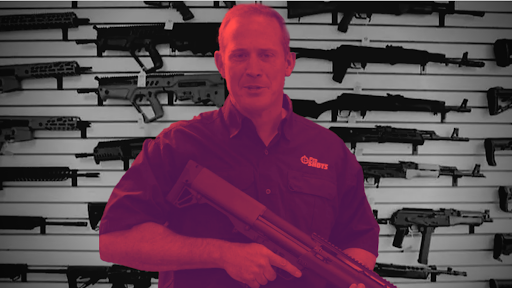 Budd found himself ahead of Beasley by around 8 points in at least one poll around the time of the May primaries, but those numbers have not held up. A number of recent polls show the race within the margin of error, some showing Beasley up by as many as 4 points and others showing Budd up 2 or 3 points.

Twice-impeached former President Donald Trump put his finger on the scale earlier in the year and endorsed Budd ahead of the Republican primary. Budd won the primary handily – but that was then.

With the damning January 6 committee hearings in the news lately, the fact that Budd called the attack on the Capitol “nothing” and “just patriots standing up,” and the cancellation of a Trump rally in Greensboro last week (due to Trump and his family being summoned to court over his finances), perhaps now is not the best time to be a Trump-endorsed seditionist Republican running for national office in a purple state.

And that’s not even mentioning the fact that Budd is a proud gun shop and shooting range owner and is a staunch defender of his interpretation of the Second Amendment at a time when mass shootings keep happening.

The sad reality in the United States of America is that we’re never more than a few days away from a mass killing event that occurred somewhere in the country at a school, supermarket, holiday parade, city street, a club, or just about anywhere else that could potentially have a crowd of people.

Mass gun violence has gotten so bad in America that Democrats and Republicans actually came together recently to pass a gun reform bill, something that’s been unthinkable for about the last 30 years. Although the bill, which President Joe Biden signed, doesn’t take any major steps like re-authorizing the ban on assault-style weapons, it does at least enhance background checks for buyers under 21 and provides billions for mental health services.

The truth is that while it’s good that a bill was passed, it’s mostly toothless – and despite that, Budd still couldn’t bring himself to vote for it. North Carolina’s two senators – Richard Burr, who Beasley and Budd are running to replace, and Thom Tillis both voted for the bill. In fact, Tillis was one of the senators who worked on creating the bill.

Budd’s explanation for his vote?

“I will not support this legislation because I am concerned that it will have the unintended effect of infringing on the due process rights of law-abiding citizens,” he said.

As The News & Observer reported, Budd doesn’t have much name recognition outside of the highly gerrymandered 13th Congressional District, which he has represented for three terms, and has extremist views that just aren’t in step with voters in a statewide race – and now he has to answer for the fact that he owns a business that literally arms people with the same type of weapons used in slaughters across the country.

A WRAL/USA Survey poll conducted in June, before the July 4 parade attack that killed seven outside Chicago, showed that 62-percent of North Carolinians want more strict gun laws. That alone puts Budd at odds with nearly two-thirds of voters in the state.

David McLennan, director of the Meredith Poll at Meredith College, told The N&O that Budd’s extreme position on guns could hurt him with a number of different types of North Carolina voters.

“Budd’s position on gun rights may ultimately harm him among some unaffiliated and soft Republican voters, particularly suburban women,” he said.

Despite the recent mass shootings, the falling poll numbers, and the gun control law he voted against, Budd is still leaning into the image of being the guy who loves guns more than he cares about children not being murdered in a classroom. His response to the Uvalde mass killing was to offer thoughts and prayers, one of Budd’s campaign ads show him with a handgun on his hip and his campaign website shows him shooting rifles.

If Budd’s extreme position on guns isn’t enough to dissuade people from voting for him, perhaps all the trips and money right-wing organizations have provided for him will make voters think twice about who they’re voting for.

According to WGHP, Budd “took advantage of his position to take several trips funded by outside groups” and has received millions of dollars in outside money for his campaign.

Those “sometimes lavish trips” were paid for by the conservative Club for Growth and other right-wing groups.

The trips and outside money were so concerning to some that his Republican opponents in the primary actually hammered him for accepting them and they became a focus of the attacks lobbed against him.

Club for Growth, which is a conservative PAC based out of Washington, D.C., spent around $14 million to prop up Budd during the primary.

Democrats have plenty to work with when it comes to attacking Budd for his extremist positions, whether it’s his anti-abortion stance, his support for the Jan. 6 attack, his love of guns, or the fact that he believes the 2020 election was stolen from Donald Trump. But now they have something else – Budd’s appearance of corruption.

Budd went on “more than a half-dozen excursions to sometimes expensive resorts” that his office claims were part of his efforts to support “the working families of North Carolina,” WGHP reported.

North Carolinians struggling to make ends meet would probably love to hear more about how Budd’s trips to expensive resorts will help them feed their families or find work or be able to afford health care. Maybe Budd can at least bring a smile to their faces as he regales them with tales about his four trips to Club for Growth conferences at the Breakers, “an ultra-posh resort on the Atlantic in West Palm Beach, Florida,” where rooms start at around $900 per night.

WGHP looked at some of the reports Budd filed with Congress which showed that he received:

The fancy trips that right-wing groups paid for Budd to go on were not illegal or violations of ethics laws, but the optics, and his office’s pathetic defense of the trips, are not good looks for a man who portrays himself as being a small-town conservative who fights against big-spending socialist Democrats in Washington.

Democrats, including Beasley campaign spokesperson Dory MacMillan, are using the trips against Budd.

“The same special interests that spent millions to get Congressman Budd through the primary also paid for his luxury trips around the world,” she said in a statement to WGHP. “It’s the latest example of how Congressman Budd is another corrupt politician who wants power at all costs and plays by his own rules to help himself.”

“Congressman Budd is a corrupt Washington politician who took tens of thousands of dollars in special interest money to go on luxury trips while failing to deliver results on the critical issues facing North Carolinians,” she said.

This campaign is going to be tough for both candidates, but with the recent poll numbers, Budd’s extremist positions on everything ranging from guns to abortion in what is now a post-Roe America, and the new all-time North Carolina fundraising record ($7.42 million) that Beasley just set in the second quarter, things are looking up for those who are hoping Congressman Budd doesn’t become Senator Budd – but there is still a long way to go before voting begins.