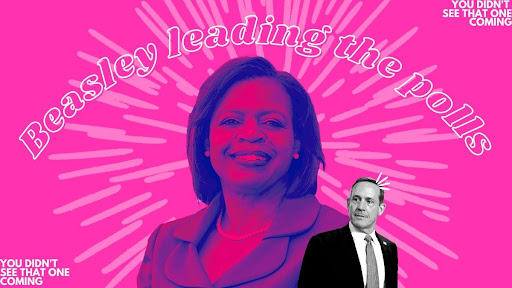 As the long march to Election Day continues across the country, Republican Senate candidates are finding themselves in an unexpected position – behind in the polls against their Democratic Party opponents.

In Blueprint’s poll, conducted from Aug. 4-6, Beasley has a 46-42 lead over Budd with 12 percent of voters still undecided. Beasley leads among women by 16 points, leads among independent voters by 12 points and is winning by 20 points with college-educated voters.

Political data outfit FiveThirtyEight shows Beasley with a 0.1 point lead over Budd when averaging out each poll’s “quality, recency, sample size and partisan lean.” Budd’s biggest average lead was by 6.2 points back on May 23. His lead in the race has evaporated in less than three months.

There are a number of possible reasons for Beasley’s rise, and according to The News & Observer, one of the biggest ones is simply that she has been spending lots of time on the road meeting voters where they live. Whether that’s in cities like Raleigh and Charlotte or tiny towns like Hertford and Camden, Beasley has been on the ground shaking hands, giving stump speeches, touring small businesses and answering questions from voters.

For his part, Budd has barely been seen over the last few months. The congressman spent a lot of time on the road during the Republican primary, skipping all of the Republican debates and rarely holding any kind of major media event – and still won with 58% of the vote – so it’s possible Budd thought he had the race against Beasley already in the bag.

Unfortunately for Budd, the political climate, which had been much friendlier to Republicans earlier this year, has quickly changed following the Jan. 6 committee hearings, the U.S. Supreme Court’s decision overturning Roe v. Wade, multiple mass shootings committed by young men who legally purchased their weapons of war, bipartisan moves in Washington to codify federal rights for same-sex and interracial marriages as well as guaranteed access to contraception and, most recently, the FBI raid on ex-President Donald Trump’s Mar-a-Lago home.

Doubly unfortunate for Budd, he has seriously troubling associations/views/votes dealing with all of those issues:

As The News & Observer has reported, Beasley’s campaign is hoping that her visits to areas of the state often neglected during campaigns – such as northeastern North Carolina and far western areas of the state – will result in those people finally feeling heard and thus more likely to show up to vote.

Beasley is focusing a lot of her time on reaching out to rural voters and letting them know her plans to help them out if she becomes North Carolina’s next U.S. Senator.

According to The N&O, when visiting these rural areas, Beasley has “focused on her policy priorities — lowering insulin costs, protecting reproductive rights and securing broadband internet for rural parts of the state” and has also made sure to contrast her views with Budd’s votes, such as his recent vote against putting a $35 per month cap on insulin costs.

Eastern North Carolina native Rev. William Barber II, who is co-chair of the Poor People’s Campaign, told The News & Observer that he believes a candidate running a populist campaign can win a statewide election by engaging low-income voters on the issues that matter most to them and giving them a voice in the campaign. He also suggested that the candidate should push “for a debate and [host] it regardless of whether the other candidate shows up. The candidate should hit hard on bread-and-butter economic issues like wages.”

As of now, that’s exactly what Beasley is doing on the campaign trail. While these polls aren’t pinpointing which issues voters are connecting with her on, they seem to indicate that more North Carolinians are realizing Budd is a dangerous man and a threat to our democracy – and Beasley is the candidate who is laser-focused on the issues that are actually going to impact people on a daily basis.