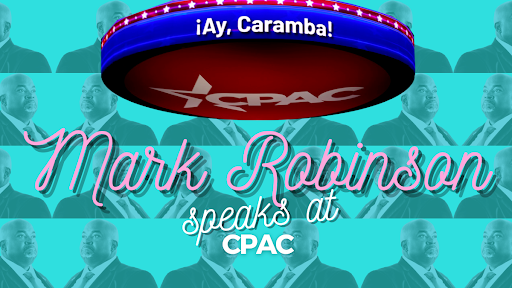 Robinson’s 12-minute speech did not have as many offensive comments as usual and focused more on motivating voters. While referencing God and reinforcing his continuous claims that the U.S. is solely a Christian nation whose future is guided by a higher power, Robinson urged the crowd to take action in November.

Robinson used a metaphor of Union Col. Joshua Chamberlain and the battle of Little Round Top at Gettysburg, Pennsylvania, when Chamberlain kept Confederate forces from taking the hill.

Urging the crowd to be like Chamberlain, Robinson said, “The world now is Gettysburg, and America is Little Round Top. And you, you are the soldiers that stand on that hill… It is up to you to hold this line.”

Robinson continued, telling the crowd, “We look down that hill and who do we see charging up? We see a whole hoard, being led by Jim Crow Joe, Nasty Nancy and Chum Schumer.”

Robinson carried on, rattling off GOP talking points about abortion, guns, education, and Covid-19. “See those folks have been coming up that hill – there’s a word for them: they’re called socialists. They’re called communists. I just prefer to call them idiots!”

It is unclear if Robinson’s broad use of the term “idiots” in this speech is referencing any of the several groups that have spoken out against Robinson’s harmful rhetoric in the past – groups that include other politicians, religious leaders, and even children. But one thing is certain – while expectations certainly weren’t high, Robinson has failed yet again to adequately represent all of the North Carolinians who make our state successful, inclusive and safe.