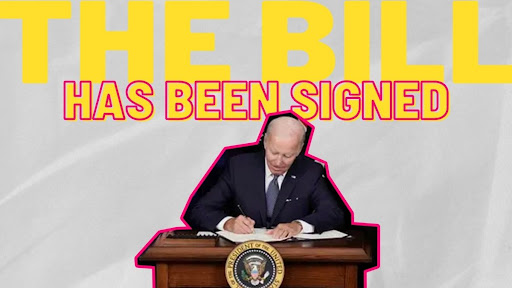 “President Biden and Congressional Democrats have worked together to deliver a historic legislative achievement that defeats special interests, delivers for American families, and grows the economy from the bottom up and middle out,” the White House said in a statement Monday.

The week before, the U.S. House passed the Democrats’ package with a 220-to-207 vote. In the Senate, the sweeping legislation passed with Vice President Kamala Harris casting the tie-breaking vote of 50 Republicans and 50 Democrats.

The bill secures the largest-ever investment to tackle climate change by incentivizing industries and utilities toward solar, wind, hydropower, and nuclear power and subsidies for building electric vehicles (EVs) and renewable energy products.

“This is important because investment is what’s needed to build production in the U.S. to clean energy,” stated Ashley Ward, a Duke University climate health scholar in a virtual briefing. “In doing so, it accelerates the transition already underway, and cleverly so, by decreasing the demand for fossil fuels rather than decreasing the supply, which results in something politically difficult, which is driving up the cost.”

In terms of healthcare, the package helps the more than 1.97 million North Carolinians on Medicare, implements a $35 monthly cap on insulin for Medicare recipients, and lowers out-of-pocket costs for life-saving medications, according to The News & Observer. In addition, the extension of the subsidies protects more than 502,000 North Carolina residents with affordable ACA insurance plans from paying more next year.

Although the sweeping package takes steps in tackling long-needed investments, zero House Republicans voted for the landmark legislation, and state Senators Richard Burr and Thom Tillis even voted against capping the cost of insulin; a measure that helps millions of Americans and North Carolinians living with diabetes.

With zero votes in the House or Senate from Republicans, the absence of Republican support on legislation filled with renewable energy and health care initiatives that will help Americans underscores the stark contrast between the parties and their interests.