Sen. Thom Tillis Votes Against Own Bill That Would Provide More Health Benefits To Sick Veterans 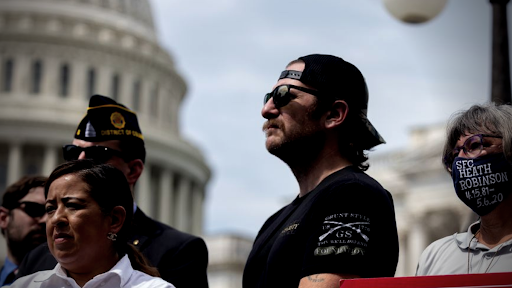 Sen. Thom Tillis likes to portray himself as a man who loves our country and our military, yet he voted three times against a veterans’ health care bill – one that he and Sen. Richard Burr helped write.

The July 27 and Aug. 2 votes on the Honoring Our Promise to Address Comprehensive Toxics (PACT) Act came a little more than a month after the Senate approved the original bill before corrections from the House were made. The PACT Act, which will provide additional benefits to veterans exposed to toxic burn pits and toxic water, had support from more than two-dozen Republicans in June.

Once the House made corrections to the bill and sent it back to the Senate, nearly all Republicans dropped their support. The bill was approved 55-42, but because of filibuster rules, the PACT Act did not pass. The bill passed the third vote last week by an 86-11 margin.

Neither Tillis nor Burr voted for the June bill or July’s final bill even though they both worked on writing the bill and it included the pair’s Camp Lejeune Justice Act, WRAL reported. Burr voted for the third version of the bill, but Tillis did not.

The bill was ready to be signed into law by President Joe Biden back in June but House lawmakers brought up an issue regarding a tax provision in the bill. Once they corrected that part of the bill and sent it to the Senate for approval, it got voted down, according to WRAL.

Burr did not provide a reason for his votes against the PACT Act or why he ended up voting for it on the third vote.

Tillis responded to a WRAL request for comment saying that he “[has] long been involved in addressing the issue of toxic exposure, ensuring toxic-exposed veterans receive the care and benefits they have earned and deserve,” and that “I strongly support the goal of the PACT Act and I drafted large portions of the legislative text.”

Voting against your own bill that addresses veterans issues you claim to be so passionate about – three times – is a strange way of showing support for America’s vets.

Tillis said he voted against the law because it would have put the Veterans Administration (VA) in control of implementing the act and he has “reservations about the [VA’s] ability” to “effectively and efficiently implement any comprehensive toxic exposure legislation.”

His statement went on to say that he’s “concerned that it will result in increased wait times, delays in receiving care, and a substantial increase in the claims backlog.”

Now that it has passed, the PACT Act will provide help to those exposed to toxic burn pits in the Middle East and elsewhere, service members who worked to clean up islands where atomic bombs were tested, veterans exposed to Agent Orange in Vietnam, plus Camp Lejeune Marines and their families who, for decades, had been drinking water full of cleaning solvents while on base.

Passing the bill will give expanded VA health care eligibility to more than 3.5 million post-9/11 veterans who were exposed to toxins while serving.

After the original bill was passed in June, WRAL spoke with Jerry Ensminger, a retired Marine who has fought for years to get the U.S. government to admit and pay for toxic water that has led to deaths or caused cancer. They spoke with him again after the Senate voted down the PACT Act in July and he had harsh words for Tillis, Burr and the more than two-dozen other Republicans who voted against the law.

“It’s beyond my comprehension why the Republican party is positioning themselves as ‘anti-veteran’ right before a midterm election,” he told WRAL. “It’s time for these people to quit playing political games with people’s lives. More than 90% of those who voted against this bill…have never served a single day in our military. Most of them have voted to send our troops to war, now they don’t want to [be] responsible for the end results of those votes. Our troops did their duties, it’s high time these politicians do theirs…this literally makes me sick to my stomach.”

Ensminger’s daughter died from leukemia at the age of 9 – one of the cancers tied to the toxic water at Camp Lejeune.

The PACT Act highlights the fatal or life-altering illnesses related to toxic exposure and also allowed for Camp Lejeune families to sue for compensation, something that veterans have tried to do for years unsuccessfully.

In typical fashion, Republicans blamed Democrats for the bill’s failure last month despite the fact that it was 25 Republicans who changed their vote and made sure veterans didn’t receive necessary health benefits.

“We’ve seen partisanship and games within Congress for years,” Jeremy Butler, CEO of Iraq and Afghanistan Veterans of America, said after the July vote. “But what is shocking is that so many senators would literally be willing to play with veterans’ lives so openly like this.”

“They’re manufacturing reasons to vote against legislation that they literally voted for just last month,” Butler added. “And so it’s really a new level of low.”

While it’s great news that the PACT Act passed the Senate by a wide margin this week, Tillis still chose not to support his own bill and showed his hypocrisy when it comes to protecting and caring for this country’s veterans.

PrevPreviousNorth Carolina Partners With United Kingdom To Address Climate Change
NextLt. Gov. Mark Robinson Would Be ‘Going To Jail’ If He Did His Own TaxesNext