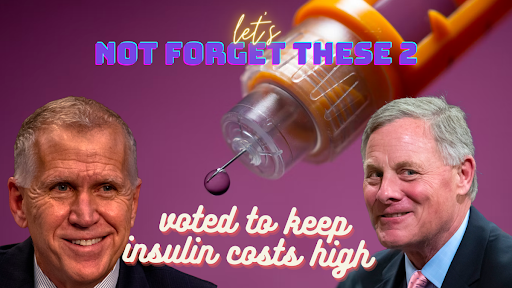 Less than a week after showing his apparent disdain for America’s military veterans, North Carolina Republican Sen. Thom Tillis showed that he doesn’t much care about Americans with diabetes, either.

According to NBC News, 43 Republican senators – including Tillis and Sen. Richard Burr – voted against capping insulin prices at $35 for private insurers as part of the Inflation Reduction Act.

The vote on the bill “passed” 57-43, with seven Republicans joining all 50 Democrats to cap the cost of insulin, but because of the 60-vote filibuster rule, the provision failed.

Voting against the best interests of their constituents is nothing new for Tillis or Burr.

Our two senators recently voted against the Honoring Our Promise to Address Comprehensive Toxics (PACT) Act – Burr twice and Tillis three times – despite the two of them working to write the bill together.

The PACT Act, which will provide additional benefits to veterans exposed to toxic burn pits and toxic water, had support from more than two-dozen Republicans in June – not including Tillis or Burr.

The PACT Act ended up passing the third reading on Aug. 2 by an 86-11 margin. Burr voted in favor, but Tillis still voted against it.

The Inflation Reduction Act passed last weekend when Vice President Kamala Harris broke a 50-50 tie in the Senate. It is likely to pass the House as well.

After the vote, Senate Finance Committee Chair Ron Wyden, D-Ore., said Republicans care more about appeasing the pharmaceutical industry than they do about regular citizens.

“Republicans have just gone on the record in favor of expensive insulin,” Wyden said in a statement. “After years of tough talk about taking on insulin makers, Republicans have once against wilted in the face of heat from Big Pharma.”

The final bill did include a $35 copay cap on the price of insulin for people who are 65 and older and are on Medicare. While that’s certainly a good thing for those eligible, it does absolutely nothing for anyone under 65 in need of insulin.

Tillis released a statement addressing the Inflation Reduction Act, calling the bill “reckless” and “an insult to the intelligence of North Carolinians.”

Neither Tillis nor Burr provided a reason as to why they believe pharmaceutical and insurance companies should continue to be allowed to rip off Americans in need of insulin and other life-saving drugs.

According to data from the United Health Foundation, almost a quarter of North Carolina’s population over 65 is affected by diabetes. Diabetes affects more than 12% of all North Carolinians.