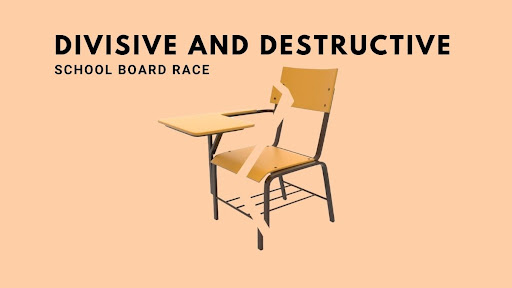 The best ticket to the American Dream and to keeping our state prosperous is through free, high-quality public schools. But instead of focusing on the real issues that plague our schools due to decades of underfunding and a global pandemic, radical Republicans in North Carolina are using our public schools to divide our communities along racial and political lines.  Nowhere is this more evident than in our local school board campaigns.

Moore County’s contentious race is just one of many counties in North Carolina where the radical right seeks to control what our children are allowed to learn.

One GOP-endorsed candidate, Ken Benway, recently told The Pilot that “school boards across the country have become flashpoints where Judeo-Christianity and Marxism are facing off toe-to-toe, and only one is going to win. We’re hoping it’s going to be us … because the trophy is the kids. Whoever wins gets our kids.”

In one quote Benway highlighted the problem. School board races are no longer about how best to educate our kids, but about a fundamental takeover of our public schools by a radical minority who seeks not only to control what our kids learn in school but would dictate which ideologies are acceptable in our society.  These right-wing factions have overtly declared war on anyone who disagrees with them. Our kids are no longer valued as the future of our state but as pawns in a political game, a prize to be won.

The Moore County Republican Party shared a photo in March of the Education First Alliance, a statewide parental rights organization whose board member attended the Jan. 6 attack on congress,, “inspiring Republicans to declare war on Leftist educators and their enablers in local and state government.”

This same group wrote in an April Facebook post that it has “moles” in most teachers’ groups and will “pay $$ to those who are willing to expose others who threaten children & parents.” Its leaders have asked people to submit names to a public list of Moore County teachers who are turning children into “woke mindless drones,” including teachers who put their pronouns in their email signatures.

Moore County is not an outlier. It seems this same scenario is playing out to some degree in almost every county in North Carolina. Educators, administrators, and school board members are being harassed and threatened regularly and its impact is causing even more valued professionals to consider leaving their positions to avoid the stress.

“I have found that negative attacks, threats on my family, threats on my home, lies that have been told about me by some members of the far right are just impossible to live with,” retired educator and Moore County school board member Libby Carter told the News & Observer. “And I’m not willing to continue to endure the stress upon my family and myself.”

Educators and school staff are already stressed and students are still struggling to recover from the impacts of the pandemic. This combative language and polarizing campaigning is only increasing tension in schools and is not good for our students.

At a time when our communities should be coming together to provide support and funding for our kids’ futures, the extreme right would rather manufacture a culture “war” and divide us. This year is critical, if all students in North Carolina are going to thrive we must have leaders with the best interest of our kids at heart.