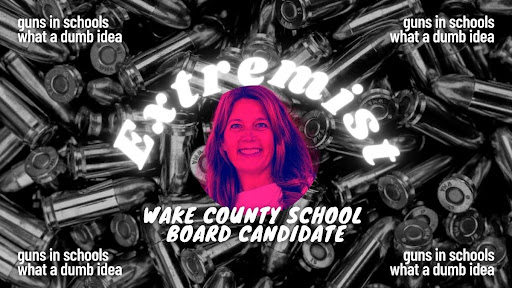 Right-wing extremist Wake County school board candidate Michele Morrow said at a debate recently that she believes teachers should be allowed to conceal carry guns in schools, The News & Observer reported.

Morrow is running for the District 9 school board seat, which covers most of Cary, and is being backed by Republicans in the nonpartisan race. She said that teachers should be allowed to exercise their Second Amendment rights, even in the classroom. However, she doesn’t believe that teachers should be responsible for providing safety for their students, according to The News & Observer.

“What I’m saying, as a Constitutional Second Amendment right, every person should have the ability to protect themselves,” said Morrow. “There’s no reason…for a child to ever know that the teacher ever had a gun in the locked bottom drawer of their desk.”

Her opponent, the Democratic-backed Tyler Swanson, said allowing teachers to bring guns into their classrooms would lead to a “mass exodus of educators.” Swanson has previously taught in Wake County schools as a special-education teacher.

“I unequivocally oppose putting guns in the hands of teachers because that is a disaster that is just waiting to happen,” Swanson said in response to Morrow’s calls to arm teachers.

Thankfully, letting teachers bring firearms into schools would require a change in state law, one that has been proposed multiple times, but has never advanced in the legislature.

As if believing teachers should be armed while teaching your children in school wasn’t bad enough, Morrow was more than happy to let voters know that she thinks the public education system in North Carolina is brainwashing our children into being liberals.

Morrow and other extremist Republicans have spent the last several years accusing North Carolina schools of allowing books with explicit sexual themes in libraries and teaching with a “liberal agenda” through the use of Critical Race Theory.

At the debate, Morrow was asked if she believed that public schools are a “socialistic indoctrination program.” She answered “yes.”

The News & Observer reported that Morrow went on to say that schools are teaching students “culturally that the United States is systemically racist” and that teachers are being told “to apologize for their whiteness.”

Unfortunately, Morrow is wrong and schools aren’t actually teaching that the U.S. is systematically racist, which it very clearly is, but they should be.

“The whole plan of the public educational system from day one has actually been to kind of control the thinking of our young people,” Morrow went on to say.

Swanson told the debate moderator that Morrow’s comments were “not even worth my response.” According to The N&O, later in the debate, Swanson said that “hateful rhetoric” from people like Morrow and others who are making “asinine claims” are the reason why teachers are leaving the profession.

Morrow is especially dangerous because she’s not just a person who has a whole litany of patently false beliefs about the education system and the government as a whole – that describes most of the modern Republican party – she’s also someone who has been active in a variety of anti-education protests in the Triangle and attended the rally in Washington on Jan. 6, 2021.

Morrow claims she didn’t storm the Capitol with her fellow rally attendees, which may or may not be true, but regardless, it still means she traveled hours to go to Washington with the belief that Donald Trump had the election stolen from him. That alone should disqualify her from serving on the school board.

Click here to read more from The News & Observer