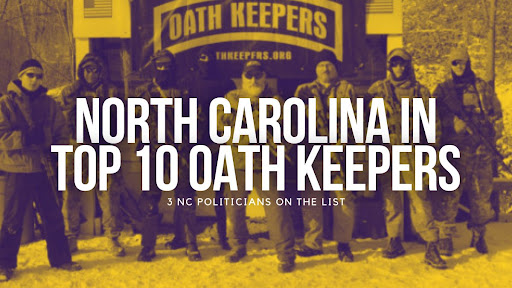 According to reporting from the Associated Press, the Anti-Defamation League Center on Extremism reviewed thousands of names on the leaked membership list and found hundreds of people who are elected officials, first responders, police officers or serve in the military.

For anyone unfamiliar with the Oath Keepers, the Southern Poverty Law Center says the militia was founded in 2009 by Elmer “Stewart” Rhodes, who spent time at Fort Bragg and is a Yale Law School graduate. The Oath Keepers are “a highly militaristic anti-government militia, consists of national leadership and state, county and local chapters,” according to the SPLC.

The group also played a large role in the Capitol insurrection on Jan. 6, 2021. More than two dozen members of the group – some from North Carolina – have been charged in connection with the violent riot that left multiple people dead, including law enforcement officers.

The data revealed more than 38,000 names in the database with at least 1,180 Oath Keepers members in North Carolina. North Carolina’s numbers include three elected officials, nine law enforcement officers, nine members of the military and one first responder. The database also contained the names of teachers, religious leaders, government employees and civil engineers from across the country.

An investigation by ProPublica in October 2021 revealed that at least three North Carolina Republican politicians were members of the Oath Keepers. State Rep. Mike Clampitt, who represents District 119 in far Western North Carolina, has been a member as well as House Deputy Majority Whip Keith Kidwell, who represents District 79 covering Beaufort and Craven counties, according to ProPublica. A county commissioner in North Carolina is also a member of the Oath Keepers, but it wasn’t made clear which county they serve in.