Right-Wing Extremism On The Rise In North Carolina

Home » Politics » Right-Wing Extremism On The Rise In North Carolina 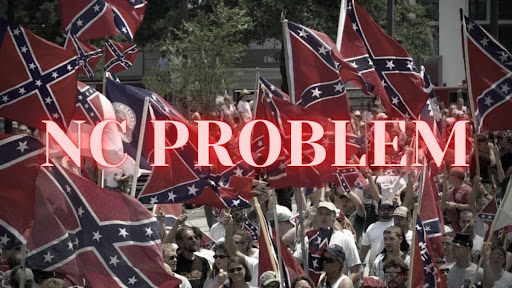 North Carolina Republicans present on Jan. 6. A proud boy running for the Johnston County school board. Controversy over the removal of a Confederate statue. A Lt. Governor spouting divisive, extremist rhetoric. Far-right education groups emerging across the state

In North Carolina, extremism is ever present in the state’s Republican Party. As right-wing extremism grows post-Trump era, North Carolina, along with many other states, will continue to witness the impact of continuous violent, divisive rhetoric.

According to the Southern Poverty Law Center, over 730 hate groups have been tracked across the U.S. as of last year. In North Carolina, 28 hate groups were tracked in 2021.

Just recently, three elected officials were reported to have appeared on an Oath Keepers database, with state representatives Mike Clampitt and Keith Kidwell as well as Watauga Board member Jason Cornett listed as members. Thousands of members from North Carolina, including police officers, are also listed in the database, according to Fox8.

Robinson, who’s made homophobic and anti-Semitic slurs his stock-in-trade, recently likened LGBTQ people to animal waste. This from a man who sits on the State Board of Education that is responsible for providing sound basic education to all students, including the thousands who are LGBTQ.

Cawthorn followed up on his previous threats of overt political violence by publicly offering teen-aged vigilante Kyle Rittenhouse a congressional internship.

And the letter makes the preposterous claim that the House of Representatives is somehow capable of re-installing Donald Trump as President.

Despite state Republican leaders and candidates siding more and more with far-right extremism, North Carolinians have pushed back against extremist measures and officials.

The Johnson County school board Proud Boy failed to get elected, and polls have shown that North Carolinians disapprove of Republicans’ campaign to censor classrooms, ban books, and erase reproductive rights.

North Carolinians also pushed forth petitions to hold Madison Cawthorn accountable for engaging in an insurrection against the U.S., and Lt. Gov. Mark Robinson received nationwide backlash over his extremist views.

As stated in a recent opinion article, state Republicans who do not agree with comments and actions like these should learn a thing or two from their constituents.

“By not standing up to people in hate groups or with far-right beliefs, we are letting white supremacy and authoritarianism become mainstream….Republicans are the only ones who can take out right-wing extremism,” wrote Sara Pequeño, an opinion writer for The News & Observer. “If they fail to stand against authoritarianism — even if they personally disagree with the extremist beliefs — they show the rest of the state that extremism is acceptable”.