Ted Budd Reveals His Own Failures To Prevent Child Abuse While Attempting ‘Gotcha’ on Gov. Cooper 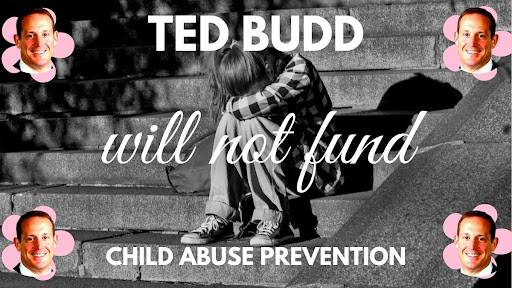 Seditious right-wing extremist U.S. Senate candidate Ted Budd is concerned enough about child abuse in public schools that he’s demanding to know what Gov. Roy Cooper is doing to stop it, yet Budd has a history of voting against bills that would protect children, according to reporting by Indy Week.

Referencing child abuse cases out of Fairfax, Virginia, and Winston-Salem, Budd wrote a letter to Cooper earlier this month demanding that the governor respond to him and detail “procedures in place to protect children in North Carolina schools.”

Budd, who has served three terms in Congress, has had the opportunity to vote for bills that would have distributed just under $900 million combined to programs created to prevent child abuse and to help victims.

Naturally, one might expect that Budd would have voted for at least one of those bills. But, he didn’t.

According to Indy Week, Budd voted against the bipartisan House Resolution 485, known as the Stronger Child Abuse Prevention and Treatment Act, in 2021. The resolution authorized $540 million to expand services related to child abuse prevention and research programs through the end of 2027.

In addition to the $540 million, HR 485 would have also created a national electronic registry of child abuse cases, address racial bias in the child welfare system and expand mental and physical healthcare services.

The resolution has yet to become law as it’s now stalled in a Senate committee.

That money was used to fund programs to prevent child abuse and for community services in North Carolina.

Budd and his fellow Republicans love to try and score cheap political points, which is exactly what Budd is attempting to do with his letter to Cooper. In this case, it appears that Budd is using the sexual and physical abuse of North Carolina’s children to attempt to score those points.

Considering how disgusting Budd’s attempted “gotcha” on Cooper is, the Senate hopeful should take a look at his voting record on the issue of child abuse prevention and reevaluate if that’s really something he wants to try to challenge anyone on. Odds are, he’s going to end up looking like a fool, just like he does here.