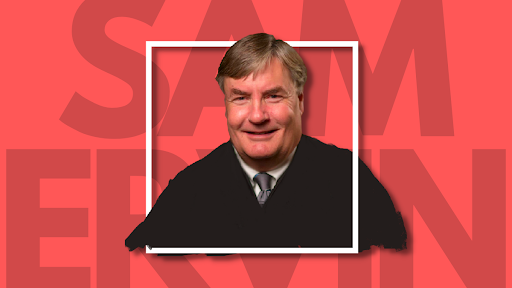 Two out of the seven state Supreme Court seats are up for election this November, with Justice Sam J. Ervin IV running for re-election in Seat 5.

Ervin, the grandson of the senator who led the Watergate investigations, grew up in Morganton, and attended Davidson College, majoring in History. After attending Harvard Law School, Ervin came back to Morganton to practice law. During his 18 years at a private practice, Ervin garnered a wide array of experience handling civil, criminal, and administrative cases and high court appeals.

Compared to his opponent, Trey Allen, a law professor who has no experience as a judge, Ervin comes to the bench with a wealth of experience and has built a reputation for his legal decision-making, receiving endorsements from dozens of attorneys, reproductive rights advocates, environmentalists, and many other groups for his re-election.

Ervin has noted that his approach is grounded in the rule of law, stating, “Judicial officials are supposed to decide the cases that come before them based upon the law, the facts, and nothing else, while giving all litigants a fair hearing and treating everyone as equal under the law.”

Similar to state Supreme Court candidate Lucy Inman, Ervin refuses to be influenced by partisan politics amid efforts by conservatives to politicize the higher court, stating, “partisan politics has no place in deciding the cases that courts are called upon to consider and that judges should take each case that comes before them for resolution with the utmost seriousness given that their decisions have real impact on real people.”

Ultimately, state Supreme Courts are essential for maintaining checks and balances within our democracy – especially when it comes to fair redistricting, reproductive rights, voting rights and dozens of other issues.

As key issues such as reproductive health care access are on the line as state Republicans ramp up efforts to push forth anti-abortion restrictions, the state Supreme Court may be the last defense to protect North Carolinians’ rights. However, if Republicans tip the balance in their favor by gaining two seats on the bench, many of these issues will be in jeopardy.

Now, more than ever, to ensure the higher court rules in the interest of North Carolinians, we must elect justices who will protect our personal freedoms.