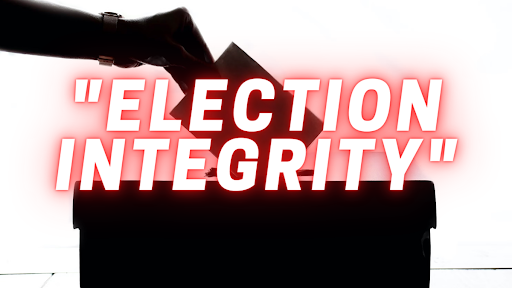 Since the 2020 presidential election, false allegations of voter fraud have been running rampant throughout the country. North Carolina, as a battleground state, has been the target of so-called “election integrity” efforts, according to The Assembly.

“Election integrity” efforts date back to the post-Reconstruction era when segregationists aimed to take back racially integrated Southern governments by casting doubt on the legitimacy of Black votes, Francesca Tripodi, a sociologist at UNC who studies how information is manipulated for political gain, told The Assembly.

Run by Jim Womack, the North Carolina Election Integrity Team (NCEIT) is presented as a non-partisan group. However, Womack himself is his county’s GOP chairman and he leads the Conservative Coalition of North Carolina PAC, which supports Trump and other far-right Republican candidates.

Other leaders and several members of NCEIT are far-right conservatives. Jay DeLancy, the group’s chief operating officer, has been an elections integrity advocate since 2011. In 2016, volunteers for DeLancy’s organization, the Voter Integrity Project, sent hundreds of postcards in Cumberland and Moore counties – when the cards were returned as undeliverable, the group claimed that as evidence that voters did not live at the addresses listed, and convinced the county boards of elections to remove those voters from the voter rolls.

Later a federal judge found that DeLancy’s volunteers had violated federal law with this process, and in 2018 the part of NC’s law that allows the state to remove voters based on challenges without also following the federal waiting period was blocked.

NCEIT is also connected to the Conservative Partnership Institute’s Election Integrity Network, specifically Cleta Mitchell, a legal advisor to Trump who joined the twice-impeached president on the infamous phone call during which Trump told Georgia’s lead elections office to find enough votes for him to win the state. Mitchell attended NCEIT’s summit in Raleigh back in June.

According to The Assembly, NCEIT discusses voter caging – the method used by DeLancy and his volunteers that uses undeliverable-mail bounce-backs as evidence that voters don’t live at their listed addresses – in their weekly calls. NCEIT’s website also says that the group uses door-to-door canvassing of “voters and addresses where apparent improper voting may have occurred” to challenge voter rolls.

Many claims made by NCEIT on the members-only section of their website have been fact-checked by the State Board of Elections and deemed partially or completely false.

Read more from The Assembly