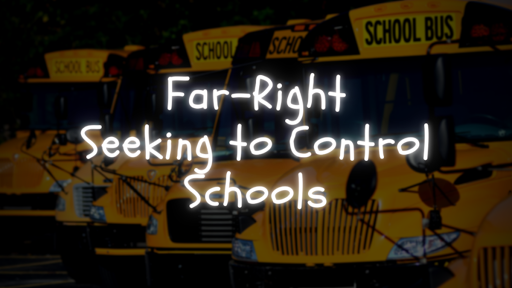 It’s no secret that Republicans are exploiting division and the pandemic to attack public schools, educators, and families under the guise of “parental rights,” a well-funded far-right movement that represents a small minority of parents.

The seemingly recent uproar over public education is not just a political ploy for school privatization or to motivate the GOP’s base ahead of the midterm elections. The emergence of far-right education groups is the latest effort spearheaded by Republicans to erase protections for Black, Brown and LGBTQ+ students, censor what history parts of history are taught, and seep white supremacist ideals further into our democracy.

With national far-right groups setting up shop in states across the U.S., including in North Carolina, these groups are using social media to spread disinformation and stoke fear surrounding school curriculums, pushing to ban books that center Black, Brown and LGBTQ+ voices, and are seeking to deny students the right to an honest education.

Nationwide, school districts are being impacted by these well-connected far-right education organizations, with North Carolina’s very own New Hanover school district becoming the next target.

In North Carolina, well-funded national far-right groups such as Moms for Liberty have created chapters in several school districts, including a new chapter in New Hanover.

In addition to sharing the same rhetoric, for far-right groups stationed in New Hanover like Tide Turners NC, F.A.C.T.S Task Force 2.0, and Moms For Liberty, the focus is to build a recruitment pipeline for extremist school board candidates to take over.

Outside of supporting all four Republican school board candidates, Tide Turners NC has built up a reputation online for spreading harmful conspiracy theories, celebrating the overturning of Roe v Wade, condemning efforts to promote diversity in schools and have criticized families that wear masks.

F.A.C.T.S 2.0 and Moms For Liberty have also shared the same rhetoric, spearheading efforts to challenge books and school curricula that center Black, Brown and LGBTQ+ experiences.

In a county that has a deep racial history, with Wilmington being the site of a coup d’état and massacre carried out by white supremacists, this far-right take-over eerily rings similar to the past; with groups tapping into discriminatory tactics and divisiveness to gain a foothold in the school board.