House Republicans, Including All 9 From NC, Voted Against Legislation To Prevent Another Coup Attempt

Home » Politics » House Republicans, Including All 9 From NC, Voted Against Legislation To Prevent Another Coup Attempt 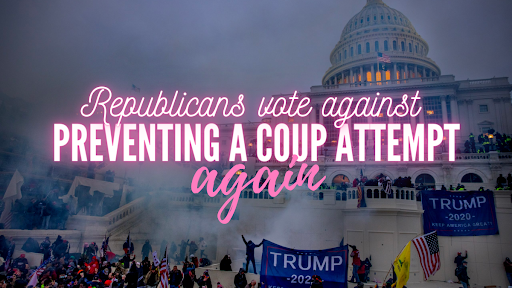 Every North Carolina Republican in the House of Representatives voted against legislation meant to protect our country’s government from another coup attempt.

According to The News & Observer, a House vote on critical legislation meant to prevent a repeat of Jan. 6, 2021, fell mostly along party lines when it was brought up in late September. All nine of North Carolina’s Republicans in the U.S. House voted against closing 135-year-old loopholes in the Electoral Count Act. That includes Rep. Ted Budd, who is running to become North Carolina’s next U.S. Senator.

The loopholes, The N&O reported, are the same ones “that Donald Trump and his allies exploited in their plot to overturn the last presidential election.”

The legislation raises the threshold required for members of Congress to object to a state’s electoral votes. It also clarifies that the vice president cannot refuse to certify the results, just as Trump pressured Mike Pence to do.

For proof that the bill isn’t some secret socialist plot to steal elections from Republicans, those opposed to the legislation can look to the Senate where a bipartisan group of senators, including North Carolina Republican Sen. Thom Tillis, introduced a very similar measure.

Such legislation shouldn’t be controversial, but as is the case with most political issues these days, House Republicans are making it into something they can rally against.

House Republican leaders called the bill “nothing more than an unconstitutional partisan power grab,” which, ironically, is exactly what the right-wing mobs were attempting on Jan. 6.

Instead of trying to make any sort of legitimate argument against the Electoral Count Act, Republicans tried changing the conversation to “real” issues that “real Americans” are facing. One lawmaker, Rep. Guy Reschenthaler (R-PA), spoke on the House floor and claimed that nobody cares about what the legislation does other than “woke yuppies” in the Democratic Party.

One North Carolina Republican tried to make the argument that the bill shouldn’t be taken seriously because it was introduced by two members of the House Jan. 6 committee, including Rep. Liz Cheney (R-WY).

“If it comes out of a rotten process, you probably ought to begin with a healthy level of skepticism,” Rep. Dan Bishop, a North Carolina Republican, said to Axios about the bill.