Meet the Republicans Running for New Hanover County School Board 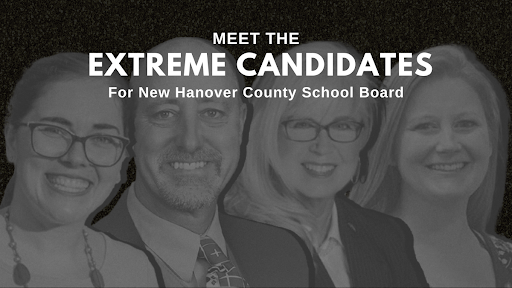 Four of the seven seats on the New Hanover County Board of Education are up for grabs this fall. The board is currently made up of five Democrats and two Republicans.

There are four Democrats and four Republicans vying for the open seats. We recently took a look at progressive candidates running for New Hanover County school board, so this time we’ll be looking at conservative candidates Melissa Mason, Pat Bradford, Pete Wildeboer and Josie Barnhart.

RELATED: Taking A Look At Progressive Candidates For New Hanover County School Board

All four Republican candidates are running on similar platforms that center around transparency, parents’ rights and accountability.

Mason also received some backlash after the NHC Republican Liberty Caucus raffled off an AR-15-style assault rifle to raise money for Mason’s campaign.

Similarly, candidate Pat Bradford says she’s running for school board because the “pendulum has swung too far to the left” in education. Bradford calls herself a “pro-life, pro-law enforcement, Constitutionalist and political outsider.”

Pete Wildeboer is the only Republican incumbent running for reelection to the school board. Wildeboer describes himself as a “Christian” and “family man” and has encouraged people to “Pray then Vote.”

Josie Barnhart has promised that if elected, she would remove Social Emotional Learning, Equity Diversity and Inclusivity, and Critical Race Theory (CRT) from the curriculum. While CRT isn’t actually being taught in schools, it would be a great disservice to New Hanover County children if the efforts to teach children about emotional health and create a more diverse and inclusive environment were removed from the curriculum.

Despite the fact that Tide Turners NC has endorsed and is supporting the Republican candidates for New Hanover County school board, they spend quite a bit of time dealing with more large-scale issues, like railing against socialism, spreading harmful conspiracy theories, and celebrating the overturning of Roe v Wade.

When they finally do get around to talking about New Hanover County schools, Tide Turners NC spends most of its time criticizing efforts to promote diversity in schools and has criticized families that wear masks in an effort to limit the spread of COVID-19 multiple times.

Voters in New Hanover County now have a choice to make regarding the future of education in their county.

PrevPreviousJudge Lucy Inman Hopes To Bring Collaboration, Experience To The State Supreme Court
NextValerie Jordan Is Running For The NC Senate Because ‘People In Eastern North Carolina Have Been Left Behind For Too Long’Next