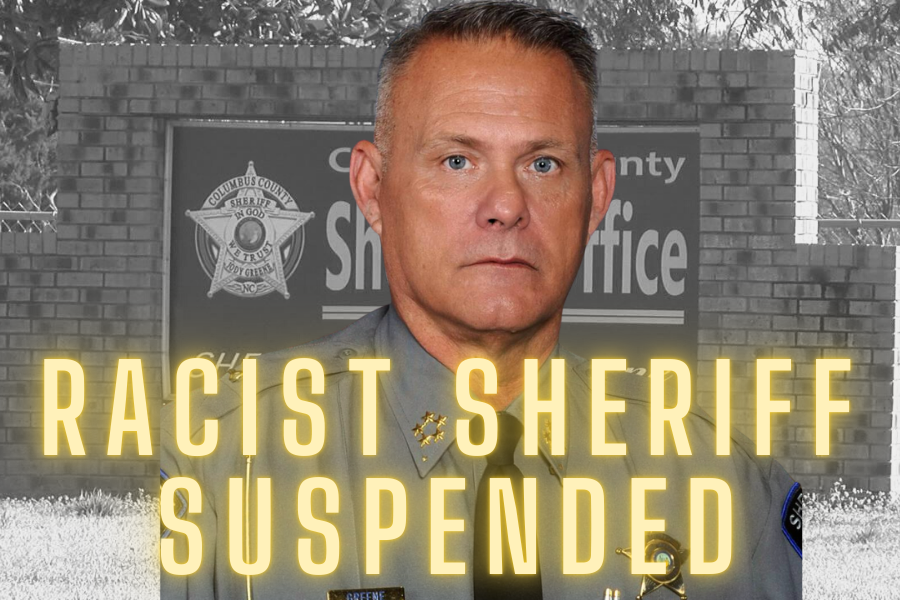 Columbus County Sheriff Jody Greene has been suspended and could be out of a job soon following the release of audio recordings where he was captured making racist comments about Black people to a sheriff’s captain, according to reporting by WECT.

WECT broke the story at the end of September when they were able to obtain and release the recordings that had been compiled by then-Captain Jason Soles with the Columbus County Sheriff’s Office. The recordings date back to February 2019.

Soles told WECT that back in early 2019 he began receiving late-night calls from Greene, including one that led him to begin recording those calls.

“This one particular phone call that [I] received, he made the comment that he hated Democrats. And then he said, ‘I take that back. I hate a Black f**king Democrat.’ And, and I knew right then, I was like, ‘Wow, this is coming from the sheriff.’ And, I had to start recording those conversations,” Soles told WECT.

The calls began when Soles was made the acting sheriff while elections officials looked into Greene’s 2018 sheriff’s race victory, which he won over then-Sheriff Lewis Hatcher, by just 34 votes. There were also concerns that Greene violated state law by not living in the county in which he was elected to serve. He was also improperly sworn in as sheriff before the election results were certified by the state.

In another call, which also occurred during the investigation into the election, Greene told Soles he was convinced that there was a “snitch” in the office who was leaking information to Hatcher, a Black man. Greene went so far as to request phone records from Verizon so he could see if anyone in the office had been in communication with Hatcher or recently-fired Sergeant Melvin Campbell, also a Black man, in the previous two months.

“They’re gone. This is as fair as I’m going to be. Just giving you a heads up, that’s coming. When me and [attorney] Boyd [Worley]…go through it tomorrow, the first numbers we see, they’re gone. They ain’t going to make it brother,” Greene said to Soles in the call. “If I have to fire every motherf**ker out there, guess what?”

Greene went on to accuse a Black female detention officer as possibly being the source of the leaks because he had been told that “she’s racist” and because one day she was “staring at me the whole f**king time” at the sheriff’s office.

“I’m tired of them f**king with me. It ain’t happening no more. No goddamn more,” Greene told Soles.

He went on to tell Soles that “a new f**king day” was coming and he was going to fire all the “Black bastards” at the sheriff’s office.

“Tomorrow’s gonna be a new f**king day. I’m still the motherf**king sheriff, and I’ll go up and fire every goddamn [inaudible]. F**k them Black bastards. They think I’m scared? They’re stupid,” Greene said. “I don’t know what else to do it. So it’s just time to clean them out. There’s a snitch in there somewhere tellin’ what we are doing. And I’m not gonna have it. I’m not going to have it.”

Greene then told Soles that he was going to start firing people who are “guilty by f**king association” with Hatcher and Campbell.

“We’ll cut the snake’s head f**king off. Period. And Melvin Campbell is as big a snake as Lewis Hatcher ever dared to be. Every Black that I know, you need to fire him to start with, he’s a snake,” Greene said before ending the phone call.

Soles said that in the three and a half-plus years since the recording was made, he and his supporters went to every official they could think of to get them to intervene in the situation at the sheriff’s office under Greene.

In addition to alerting officials, Soles also brought the recording to the attention of the Columbus County Board of Commissioners. Only one commissioner, Buddy Byrd, who had previous issues with Greene, even followed up with him about the recordings.

“Everybody had deaf ears,” Byrd said of the reaction of other commissioners when he told them about the racist recording of the sheriff.

“I have reached out to everyone that I know to reach out to. I’ve even tried to get to the governor. I started at the bottom of the commissioners and worked all the way to the top to the AG’s office and the governor’s office. But I just can’t get seem to get any help,” Soles explained to WECT.

After years of trying to get someone to look into Greene, things are finally happening after the recordings were made public.

Greene is now facing calls for his resignation from the NAACP and others in the community.

The Columbus County Branch of the NAACP released a statement after the recordings were made public:

“Sheriff Jody Greene must resign. His language is divisive, nasty, and offensive — his words are disparaging and hurtful to people of color. His actions have cast a cloud over his ability to execute the office with impartiality.

Our leaders in law enforcement should be held to high moral standards. The NAACP, as a member of the Governors’ Task Force on Racial Equity in Criminal Justice, knows these biased and prejudicial statements have no place in law enforcement. We call on other members of law enforcement, county leaders, and all who call Columbus County home to reject the sentiments expressed in these statements.

Columbus County, and in particular its Black residents, deserve better. We deserve accountability. To restore dignity and confidence in the office of the Columbus County Sheriff, we demand a thorough investigation of all activities conducted by this office since the beginning of Sheriff Greene’s tenure, by all relevant authorities — including the State Board of Investigation and the federal government.

This is a moment for us to join together in solidarity and strengthen our community against those who would seek to split us apart. The NAACP will continue to speak truth to power alongside our Columbus County neighbors until justice is served.”

Columbus County District Attorney Jon David has also made a formal request for the State Bureau of Investigation (SBI) to investigate Greene for obstruction of justice. David also told WECT that his office will now need to look into concerns about biased policing by the sheriff’s office and that there could be “issues for the sheriff or officers in his department being credible witnesses for criminal cases they investigated.”

On Oct. 3, David made a formal request for Greene to resign as sheriff of Columbus County. In his petition, David wrote that “Defendant has committed willful misconduct and maladministration in office. The acts committed by Defendant… constitute corruption while in office.” He also accused Greene of engaging in “racial profiling of sheriff’s office employees both personally and via other people under his command,” according to WECT.

On Oct. 4, Superior Court Judge Douglas B. Sasser agreed to David’s request to suspend the sheriff until a hearing could be held on the petition for removal, WECT reported.

“And the Court, upon consideration of the Petition and Verification presented in support of the allegations, finds sufficient cause to immediately suspend S. Jody Greene from the Office of Sheriff of Columbus County,” Sasser wrote in the order.

In addition to the calls to resign, the suspension, the SBI investigation, and the examination of previous cases by the DA’s office, the North Carolina Sheriff’s Association also spoke out against Greene and announced that he had resigned from the organization.

“The North Carolina Sheriffs’ Association (the Association), representing all 100 sheriffs in our state, is aware of racially-charged comments allegedly made by Columbus County Sheriff Jody Greene, that shock the conscience. The comments made on the recording are inflammatory, racially derogatory, insulting, and offensive.

The Association believes sheriffs are and should continue to be held to the highest standards of professionalism, ethics, principles, and morals and should serve their communities regardless of race, color, national origin, religion, or sex. Comments that disparage any North Carolina citizens certainly do not meet those standards.

The preamble of the Association’s Constitution creates an Association that establishes “bonds of confidence, respect and friendship” among the sheriffs across the State, maintains peace for NC citizens, and seeks to gain the public’s confidence through the “courtesy, honesty, integrity, and dependability of the sheriffs of North Carolina.

Therefore, the Association’s Executive Committee (governing board) voted unanimously to hold a hearing to determine, pursuant to the Association’s Constitution and Bylaws, an “appropriate resolution for the matter,” up to and including expulsion of Sheriff Greene from membership in the Association.

Upon being notified this afternoon of the Executive Committee’s decision to schedule a hearing, Sheriff Greene resigned his membership in the Association to avoid causing any controversy for the Association.”

For his part, Greene posted a comment on the sheriff’s office Facebook page on Sept. 29 that said, “I have not resigned as the Sheriff of Columbus County. I will continue to serve no matter the allegations or rumors. Thank you all for your concerns and support.” He has not said anything since his suspension was announced.

Whether he resigns or not, Greene is up for reelection in November and he’ll be going up against someone very familiar to him – Jason Soles.

Soles said he was concerned that the most powerful law enforcement officer in Columbus County was racist, and would not treat Black employees or the residents he policed fairly.

“It broke my heart. Because that’s not what I believe in. It upset me to the fact that I did have to start recording his phone calls. And I’m not wanting to go around recording people’s conversations. But… this was not the leader that we needed leading the Columbus County Sheriff’s Office making these racial slurs,” Soles explained to WECT.

The hearing on the petition to remove Greene as Columbus County sheriff is scheduled for Oct. 24 at 10 a.m.

PrevPreviousReproductive Freedom Is On The Ballot This November. Sen. Sydney Batch Is Ready To Defend It.
NextHouse Republicans, Including All 9 From NC, Voted Against Legislation To Prevent Another Coup AttemptNext