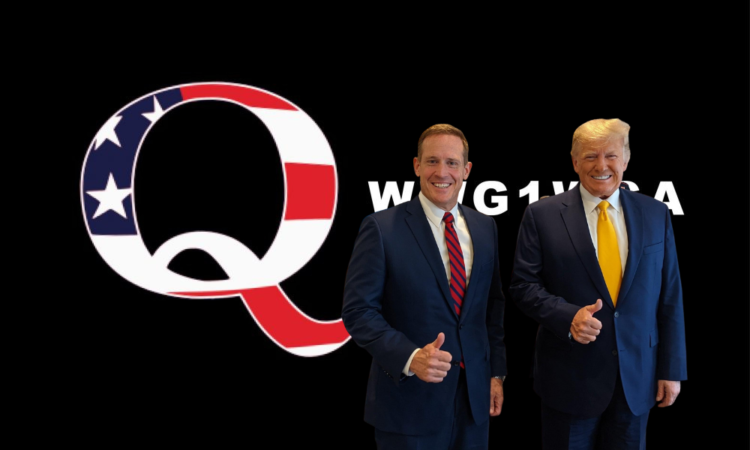 They came into the mainstream when hordes of them were captured on live TV attacking police officers outside the U.S. Capitol with flagpoles and searching through the building for then-Vice President Mike Pence.

According to the Wilmington Star-News Online, the rally attendance was what vendors who follow Trump rallies called “light” and many people had already after the twice-impeached former president took the stage 45 minutes late.

As the event was coming to a close, some people in the crowd raised one finger as a song, which has been deemed the “QAnon Theme Song,” played over the speakers at the Aero Center.

The single-finger gesture appeared at a rally in Ohio before the Wilmington event and has appeared at other rallies since.

As WGHP reported, the origin of the gesture is unclear and some journalists who follow the QAnon conspiracy theory told CNN they’re skeptical that the raised finger is tied to QAnon.

Despite some journalists’ doubts, The Independent called the gesture a “QAnon salute” and noted that multiple people in the Wilmington crowd were wearing QAnon gear or holding Q-related items.

Whether or not the gesture originated within the QAnon conspiracy, it’s now recognized as being connected. In fact, Wilmington rallygoers confirmed to a PBS Newshour journalist that the gesture was meant as a QAnon salute and that it symbolizes the group’s “Where We Go One We Go All” (WWG1WGA) slogan.

Video from the Wilmington rally showed Trump’s private event security going person-by-person through the crowd and pushing arms down so that attendees would no longer be seen doing the QAnon salute while Trump spoke. One rally-goer told the PBS journalist that he was furious about being told to put his finger down, telling her that the salute was “my Constitutional right!”

There is something that doesn’t add up about the attempts to silence attendees’ fingers. Rally-goers are doing the salute during the so-called QAnon Theme Song, which keeps getting played at Trump rallies. If Trump (or his handlers) don’t want QAnon conspiracy theorists attending the rallies or “saluting” during speeches, maybe they should stop playing the theme song – unless, of course, Trump welcomes that kind of support.

Speaking of which, the song has nothing at all to do with the conspiracy. According to WGHP, the song is a licensable piece of music from composer Will Van De Crommert called “Mirrors.” The song, unfortunately for the composer, was reuploaded under the name “WWG1WGA” by a person named “Richard Feelgood” – and the rest is history.

Van De Crommert told NBC News he’s “exploring legal options” because his song is being used without his permission at Trump rallies and other political events.

Neither Budd nor his campaign has made any statement regarding the QAnon-supporting crowd that attended his rally. They have also not said anything about Trump’s N-word (nuclear) “joke” that he made at the Budd rally.