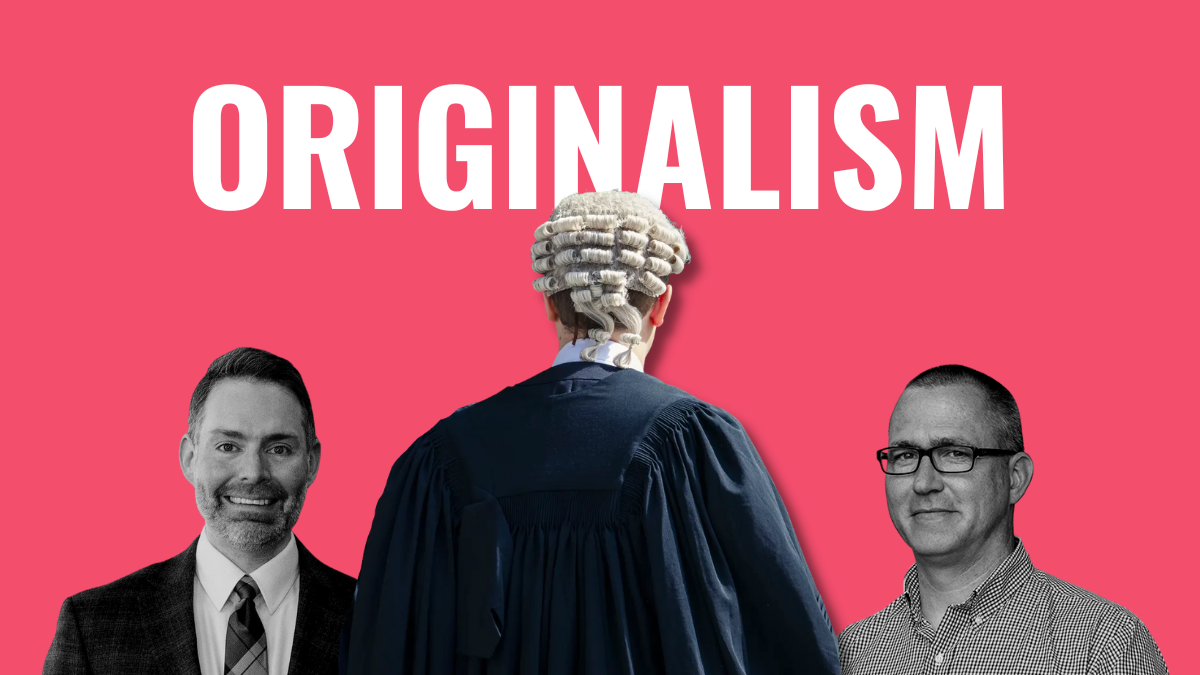 Politicians, the media and judges themselves would like for the average person to believe that it takes some sort of genius to be one of the nine people on the U.S. Supreme Court who gets to rule on disputes that determine the laws and rules that the other 330 million people in America must follow.

But, did you know that there is nothing in the constitution that says a Supreme Court justice must be a lawyer or even have a law degree? The only requirement is that “all Justices have been trained in the law.” That means that, theoretically, as long as we have a law mentor, any one of us, if nominated and approved, could be a Supreme Court justice – a scary thought, honestly.

Now, what if I told you that some of the “most brilliant minds” on the court, and through the court’s history, think that the laws of today should be determined by putting on a powdered wig and thinking about what the original intent of the founders was and how it relates to the current day? That sounds insane, right? What could Supreme Court justices in 1792 possibly know about how to handle literally anything that comes before the court in 2022?

While it’s kind of fun to think about the stupidity of such an exercise in futility, originalism – the idea that the Supreme Court should make decisions based on what people 230-plus years ago thought – is actually incredibly dangerous and has already had far-reaching impacts on American life in just the last several months.

Originalism made its first big entrance in 1857 when the Supreme Court ruled in Dred Scott v. John F.A. Sandford that, although Scott was living in a free state and territory where slavery was prohibited, he was still not entitled to his freedom. The decision meant that African-Americans were not and never could be American citizens. The decision also nullified the Missouri Compromise of 1820, which had made it so that all territories west of Missouri and north of latitude 36°30′ were free, meaning that slavery had been illegal in those places – until the Supreme Court had their say.

According to Michael Waldman, President of the Brennan Center for Justice at NYU School of Law, the 7-2 decision of the court was the first major originalist ruling, with the court finding that free Black people could not be citizens because it was “in the original intent of the founders.”

The court’s ruling pushed the nation even closer to Civil War and was such a disaster of a decision that the entire originalist approach wasn’t used again for over 100 years, Waldman wrote.

Considering its history, it shouldn’t come as much surprise that originalism didn’t come back en vogue until the 1960s and 70s as a reaction from conservatives to the expansion of rights for Americans who weren’t white men.

“Originalist” readings of the Constitution have been cited more recently, such as in Justice Antonin Scalia’s 2008 ruling in the handgun ban case D.C. v. Heller. As Waldman wrote, Scalia apparently relied on history while deciding the case “when he found that [history] recognized an individual right to own a gun to protect ‘hearth and home.'” After the ruling, Scalia was asked what the difference was between him and Justice Clarence Thomas, to which he replied, “I am an originalist. I am not a nut.”

While on the topic of Thomas, he wrote the majority opinion in this summer’s Second Amendment case, New York State Rifle & Pistol Association v. Bruen, using his version of originalism to overturn a 1911 law that largely prohibited people from carrying a concealed weapon in New York.

In Waldman’s view, “Thomas makes no effort to understand the reason why the law was enacted over a century ago, how it has worked, or the fact that New York…[has] lower rates of gun crime than elsewhere.” He went on to write that, “Thomas ransacked the historical record, [using] classic ‘law office history’ that seeks supporting evidence.” The opinion was so bad that Justice Stephen Breyer mocked it in his dissent.

The ruling in Bruen was an especially dangerous one because the Supreme Court has now essentially said that all gun regulation that ends up in a court somewhere should be assessed only by looking at “history and tradition,” forcing judges throughout the country to “play as amateur historians, looking for analogies.” What do history and tradition have to say about modern weaponry? Who knows.

Another recent decision based on the idea of originalism is Justice Samuel Alito’s ruling in Dobbs v. Jackson Women’s Health Organization, otherwise known as the ruling that led to the overturning of Roe v. Wade.

Waldman wrote that “Alito’s use of originalism in Dobbs v. Jackson Women’s Health Organization shows it to be dangerous and reactionary.” He notes that Alito distorted the history of abortion in his opinion when he wrote, “The Court finds that the right to abortion is not deeply rooted in the Nation’s history and tradition,” despite the fact that “Abortion was legal at the time of the founding, but faced bans later in the 19th century.”

In Waldman’s view, Alito’s opinion means that “the Court looked to a time when women could not vote or sit on juries, when Black people were slaves, when sexual orientation was a shameful secret. The opinion purported to just turn the issue of abortion rights over to the people in the states, but in terms of the Constitution, it would repeal the 20th century.”

In layman’s terms, if you were to extrapolate Alito’s reasoning, then the Constitution wouldn’t allow women to vote or serve on juries, Black people would still be enslaved, there would be no LGBTQ+ rights such as the right to marry, birth control would be illegal and all of the progress that we’ve seen in America over the last 100 years would have never happened.

Of course, Alito didn’t specifically say those things – but Clarence Thomas took the cue and suggested that perhaps courts should re-examine the decisions that gave Americans marriage equality, the right to contraception and LGBTQ+ rights.

Now that we know what originalism is and how right-wing extremists use it on the Supreme Court, it’s time to look at how and why this is relevant to the state Supreme Court race here in North Carolina.

As we at NC Voices have covered previously, there are two extremely important Supreme Court contests that will be on the ballot and they will likely determine the direction our state heads in for the next several years, or perhaps even decades.

Democrats currently hold a 4-3 majority on the North Carolina Supreme Court but Republicans could find themselves with a 5-2 advantage after November’s election.

In the race for the seat currently held by the retiring Democratic Associate Justice Robin Hudson, North Carolina Court of Appeals Judge Lucy Inman, a Democrat, is taking on Republican Judge Richard Dietz, who serves alongside Inman on the court.

Both Dietz, who is a judge, and Allen, who has absolutely no judicial experience whatsoever, have said that they want to follow in the footsteps of Thomas and Scalia. The two men claim that they have developed their judicial philosophies through the influence of these two proponents of originalism.

Dietz said that Scalia and Thomas are some of the legal thinkers that have had “the most influence” on him throughout his career. He has also called Scalia “an amazing legal writer” and said that “when interpreting statutes, I often use Justice Scalia’s book ‘Reading Law.’”

As for Allen, the candidate who has never been a judge at any level, he answered a questionnaire by Christian election guide iVoterGuide about his judicial philosophy and repeatedly cited Scalia, Thomas and originalism in his answers.

Allen said Thomas and Scalia best reflected his judicial philosophy and “strongly agreed” with the statement “Justices Should Not Interpret the Federal & State Constitutions as Living Documents, but Should Use a Textualist & Originalist Approach to Interpretation.”

In his explanation for taking an originalist approach, Allen said the following:

“The problem with the ‘Living Constitution’ is that it always seems to evolve in ways that line up with the judge’s preferences. Originalists like me insist that courts are bound by the provisions of the federal and state constitutions as they were understood at the time of ratification. When constitutional changes are necessary or desirable, the people can make them through the amendment process. Courts have no authority to amend our constitution through judicial decisions.”

At a candidate event in September, Allen said that his approach aligns most with Scalia and Thomas but he believes Thomas is “less committed to established court precedent than he would be as a state Supreme Court justice.”

At the same event, Allen emphasized his willingness to revisit decisions made by the Democratic Supreme Court. According to WRAL, Allen “emphatically [made] the case for an apolitical judiciary that gives more deference to the will of state lawmakers and potentially revisits recent decisions from a Democratic-led court.”

Allen’s most alarming defense of originalism also came in his iVoterGuide questionnaire where he said that “Judges have no authority to create rights… If an alleged right falls outside the original understanding, the court should not read it into the Constitution.”

An answer like that should make one question if Allen believes that Black people should still be slaves, if women should have the right to vote, or if people of different races should be allowed to share the same water fountain or a counter at a bar, let alone be in a relationship together or get married.

A recent WRAL poll shows Dietz and Allen leading their Democratic opponents, but the races have tightened significantly over the past several weeks. When it’s time for you to go out and vote, remember that the Republican candidates for the North Carolina Supreme Court, as well as current Republican members of the court like Chief Justice Paul Newby, support the legal theory that allowed slavery to expand to free states and helped precipitate the Civil War, reversed gun safety laws in Washington, D.C., and New York, took away the constitutional right to reproductive care in America and, if allowed to permeate our courts, would have horrifying consequences for women, minorities and LGBTQ+ people.

PrevPreviousTed Budd’s Debate Answers On Marijuana Legalization, Opioid Crisis Show How Out Of Touch He Is
NextA Majority Of Americans Support Protections for Same-Sex MarriageNext