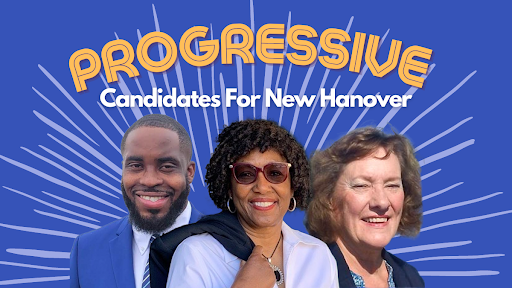 Four of the seven seats on the New Hanover County Board of Education are up for grabs this fall. The board is currently made up of five Democrats and two Republicans.

Eight candidates, four Democrats and four Republicans, are vying for the open seats. Among the eight candidates are three incumbents.

We will be highlighting the platforms of three progressive Democrats who are running: Dorian Cromartie, Veronica McLaurin-Brown and Judy Justice.

Wilmington’s Port City Daily (PCD) recently contacted the candidates to get their responses to questions about the state of education in the county.

First up we’ll take a look at Dorian Cromartie, who is a longshoreman, a former member of the military, and has family ties to education and public service. According to WECT, his grandmother, Rachel Freeman, was the first Black woman to serve on the New Hanover County School Board, and his great uncle, Major General Joseph McNeil, was one of the Greensboro Four who sat at a segregated Woolworth’s lunch counter in 1960.

Cromartie told PCD that his top three concerns within NHC schools are safety, adequate pay and resources for teachers, and raising the bar “for expectations for excellence and achievement.”

In his questionnaire, Cromartie highlighted his belief that the district’s use of “seclusion rooms” for students with behavioral issues should be terminated, that summer and afterschool programs need to be made more easily accessible for all students, that school resources officers (SROs) should only be used in “extreme instances” and said that North Carolina “needs to fully [fund] the Leandro Plan now.”

Cromartie said that no one – teachers, staff, bus drivers, etc. – is being fairly compensated for their time and efforts. He also called for putting at least one teacher’s aide in each classroom and said that staff like janitors and cafeteria workers are essential and “need to be paid as such.”

Explaining why he’s the best candidate for the board, Cromartie highlighted his education in NHC schools, as well as his youth and energy, which he said allows him to identify with some of the same issues that students are experiencing. He went on to say that it’s important that he be on the school board because he is “an African-American man who needs to be at the table to ensure minorities trust that their best interests are being discussed.”

Next up, we’ll look at Veronica McLaurin-Brown, who led all candidates, Democrat or Republican, with 11,852 votes in May’s primary election.

McLaurin-Brown spent 30 years as an educator in the NHCS system and told WECT that she is known as someone who has a strong work ethic and that she considers herself an advocate with the ability to effect change. That ability was evident earlier this year when the school board voted to end suspensions for young children in situations not involving weapons or drugs – an issue she had advocated for.

In her responses to PCD, McLaurin-Brown said her top three beliefs about the school system are that children come first, quality teachers and staff are vital, and infrastructure must be improved.

McLaurin-Brown said that children deserve a quality education and that there are no excuses for why that can’t happen.

“We must ensure that every child at every school receives a high-quality education. No ‘low performing’ schools should exist in our resource-rich county,” she said. “I would evaluate all school board decisions based on the question: ‘How does this help our children?’”

McLaurin-Brown said she also believes that the school district “must attract and retain highly qualified, certified and classified staff” and that they can accomplish that by “increasing pay, providing professional support, and creating a positive school culture and climate.” She went on to say that staff members deserve to be acknowledged for their work and should be given “a seat at the table where decisions are made.”

As for the infrastructure of the school district, McLaurin-Brown said that there are issues with “both policies and physical resources” and that the system “must promote policies that end disparities in student outcomes, as well as disparities in our buildings.”

Answering more questions from PCD, McLaurin-Brown called seclusion rooms “a locked, padded closet” and said that the practice of using them “is shameful.”

Addressing learning loss due to the COVID-19 pandemic, she said that the learning loss discussed in the media is about test scores, but her concern about loss “is the limited in-person interactions students had with their peers and other adults when our schools were closed.” Because of that, “it is so important that we also focus on building trusting student-teacher relationships and continue teaching life skills that are the essential building blocks of mental wellness.”

McLaurin-Brown also explained her thoughts on SROs at district schools.

“There may be a place for SROs in our schools, but more funding is needed for problems at their source,” she said. “Students need more access to guidance counselors, social workers and community health workers.”

Taking on the right-wing movement to ban books, McLaurin-Brown said, “I am concerned about the books in our schools, too. We need more of them – and more that represent the diverse population we serve.”

Just as Cromartie mentioned in his answers, McLaurin-Brown also brought up the importance of fully funding the Leandro Plan.

“The New Hanover County School District receives 65% of their funding from the N.C. General Assembly. Our education, business, faith, and community leaders must demand that the assembly fully fund the Leandro Plan,” she said. “That plan could bring in over $57 million in additional funding to New Hanover County by 2028 to hire and retain the high-quality staff that we need to educate all of our children.”

Next up is incumbent Judy Justice. She is seeking her second term on the board.

Justice is a retired educator with over 30 years of experience and spent time as a teacher at Laney High School, according to WECT. Justice was elected in 2018 after running on a platform of transparency and accountability.

Asked about her top concerns, Justice said that the district’s students and staff are under-resourced and that she has “never seen our schools in such dire straits.” She also called out “the failed leadership at the top of the NHCS school administration” and said that “staff morale has hit rock bottom,” citing lousy communication, burdensome schedules, diversion of funds, misplaced blame and retaliation against employees. Another concern of hers is the increase in racial and economic segregation, which she said, “is preventing equitable education opportunities for too many of our students.”

Echoing the sentiments of Cromartie and McLaurin-Brown, Justice also said she’s strongly opposed to the district’s use of seclusion rooms.

Justice said that “locking a child in a padded room…because they are having an emotional meltdown, is…a form of abuse.”

Addressing the issue of COVID-19 learning loss, Justice said that she believes “a majority of our students experienced some form of trauma as a result of the pandemic,” whether that was because of fear, isolation, or watching a loved one suffer and/or die from COVID.

Justice said that students need academic, social and emotional support and that there are “things in life a lot more important than test scores.”

Regarding SROs in schools, Justice said she believes that officers are necessary for some of the district’s more populated schools, which she said, “are equivalent to small towns.”

Although she does support the use of SROs in some schools, she did express concern about the specialized training officers receive and said that there have been a number of examples of officers who “approached students as adults in a school setting and the results harmed the students unnecessarily.”

She also said that the Uvalde, Texas, school massacre that happened in May, where officers stood around for more than an hour as children were murdered in their classroom, is an example that “[SROs’] presence is obviously not always helpful.”

In response to a question about book bans, Justice had strong words for those who seek to censor school classrooms and libraries.

“I actually believe it is a small group of people, some not even parents, who are actively promoting this idea of banning books and attacking school curriculum for political reasons across the country,” she said.

Justice went on to say that politics should be kept out of the public school system and that there “are plenty of systems in place to make sure that a student’s parents can stop a child from reading material they find objectionable.”

She continued railing against the absurdity of book bans by pointing out that these people who are apparently so offended by words in a book aren’t speaking out against the easy access to actual pornography that these same students have.

“What, to me, is telling is that most students have access to internet technology that has nothing to do with our library materials and they can easily access pornographic material online using a variety of devices,” Justice said. “That should be of real concern for the people who are currently upset about what is in school libraries.”

Justice also said that she believes book bans are a violation of the First Amendment and that the entire movement “is part of a national political campaign that actually is an effort to prevent students from learning the facts of our country’s past.”

Although Justice didn’t specifically mention funding the Leandro Plan like Cromartie and McLaurin-Brown, she did correctly point the blame at the North Carolina General Assembly for the issues seen in public schools across the state.

“[T]he North Carolina General Assembly has radically cut school funding for staff for the last 12 years to the point that North Carolin is 48th in the nation when it comes to supplying resources to our students, including staff pay,” she said. “We spend $3,000 less on average in this state than the national average.”

She also faulted county commissioners for their role in the staffing and pay issues.

“It has been left up to the local governments to make up the difference. Unfortunately, our county commissioners are not doing their job when it comes to paying their share of the county budget to our schools so that our staff can earn at least a living wage let alone a good living wage,” Justice said.

Voters in New Hanover County now have a choice to make regarding the future of education in their county. Election Day is Nov. 8 and early voting will begin on Oct. 20 and run until Nov. 5. Absentee ballots are available to be requested now and must be submitted by Nov. 1. For more information about the upcoming election, visit NCSBE.gov.