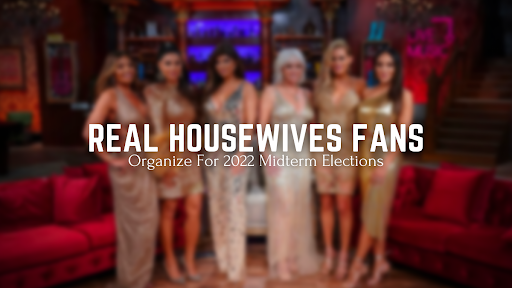 The Working Families party recently launched a new organizing initiative entitled “The Real Housewives of Politics.” The group aims to organize fans of the popular Bravo franchise from Potomac to Orange County. The group hosted a cocktail party during this year’s BravoCon in New York City to officially launch the program.

Nelini Stamp, Working Families Party’s Director of Strategy and Partnerships told HuffPost, “We aren’t going to organize every ‘Housewives’ fan, but people come from all walks of life and there’s a subsection of fans who wanna get political, wanna get active. We want people to organize on the basic level, to get more engaged, to go vote, and to build community in the ‘Housewives’ fandom.”

While the popular program gained notoriety for epic one-liners and displays of opulent wealth, the franchise is no stranger to politics in recent years.

The Huffington Post highlighted how the 2016 presidential election marked a shift when the cast of the Real Housewives of New York filmed their season during the 2016 presidential election. During this season, the women were filmed having frank political conversations and Host Andy Cohen even made a point to ask each of the women who they voted for during the reunion.

The network was also forced to address the lack of diversity in its franchises in 2020. And while steps have been taken to address this important issue, there is still work to be done to ensure the casts are more reflective of the identities and values of the audience. According to the Huffington Post, “The network added more women of color to casts, but these women are often the only nonwhite person in their franchise and forced to take on the burden of educating audiences and cast members on issues of race.”

While Bravo fans continue to push the network to increase diversity in the Real Housewives, the Working Families Party seeks to tap into this already activated fandom and encourage people to voice their opinions at the ballot box.

Stamp said, “We’ve done pop culture and we’ve done organizing of artists and creatives, but I think the third piece we’ve always wanted was getting into fandoms. But it took us two years to build the team and focus on which fandom we wanted to choose and ‘The Real Housewives’ just made sense.”

The Real Housewives of Politics got the attention of the right-wing hosts at Fox News. Host Greg Gutfield said “So how will they woke-ify the wives? These are women who think following the science means another facelift, and they already dress like drag queens. But the left are going to build a following on their Instagram pages, create memes and reels that connect “The Real Housewives” fans with progressive politics. And only progressives could come up with that mismatch. Take something shrieking, mindless, loud and stupid, and then pair it up with ‘The Real Housewives.‘”

It’s no surprise that the idea of organizing a national fandom of primarily women and minorities would elicit such a reaction from an outlet like Fox News.

Samantha Bush, the creator behind the popular Housewives meme account @BravoHistorian, told HuffPost, “Most people who watch Bravo are women or people who identify as LGBTQ+, and to see a bunch of progressive Bravo lovers come together and support is what we need right now…”

The Working Families Party has taken the criticism of right-wing commentators in stride and has begun selling “Radicalized Housewives Fan” T-shirts to support their organization.
To learn more about the Real Housewives of Politics, follow their Instagram @RhoPol.