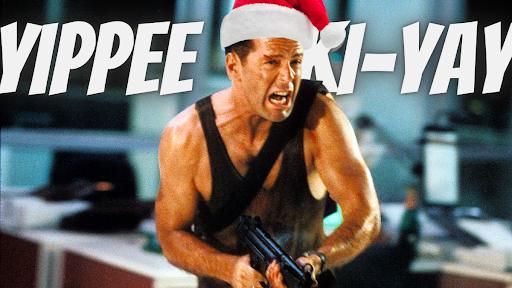 It is the most wonderful time of the year. Well not for me because I hate the cold weather and shorter days but to the rest of y’all, cheers! During this time of the year, people like to shop, visit family and friends and just enjoy the festive mood of the holiday season. Amongst other fun things, folks like to watch holiday-themed movies to get them in the spirit. We can all name dozens of holiday films that we enjoy watching during this time but one film has been hated on for years as not being a holiday film.

For the record, Die Hard IS A HOLIDAY FILM! Anyone that thinks or feels differently probably doesn’t know what is categorized as a holiday film. After carefully watching Die Hard 1,048 times, it is safe to say that it is a holiday film and I stand by this decision. The film is basically about a New York police officer visiting his wife and kids for the holidays and finds himself at his wife’s office Christmas party when all hell breaks loose and things turn into a hostage situation with terrorists.

Before we dive into the film let’s send our condolences to Clarence Gilyard Jr who recently passed away. Gilyard Jr played Theo the computer genius in Die Hard but other roles in hit shows like Matlock and Walker Texas Ranger made him a popular actor in the 80s and 90s.

Without Theo and his great computer skills, Hans Gruber played by Alan Rickman and his gang of West German mercenaries wouldn’t be successful in infiltrating Nakatomi Towers. This infiltration happened on Christmas Eve during the holiday Christmas party by the way. There is your first hint this is a holiday film because the whole movie took place at an office Christmas party with folks festive in the holiday spirit.

The greeting of Merry Christmas was mentioned over 15 times. Another obvious point that Die Hard was a holiday is the playing of holiday music during numerous scenes and the movie credits. Nothing is more holiday than hearing Run DMC’s holiday classic Christmas in Hollis. Now, who plays that song any time of the year outside of December? No one! If you haven’t heard of this song then you need some culture in your life. Sadly a few Santa Claus decorations were destroyed in the film along with a few Christmas trees. John McClane did save the day on Christmas Eve and all had a good night after the chaos. I’ll leave it to you to watch the film for more details.

If Die Hard is not a holiday film then neither is Home Alone. Both films took place during the holidays involving separation from family members and the eventual reuniting of loved ones. Both films had criminals trying to ruin the festive holiday by committing acts of crime that are punishable with prison time. The only difference between John McClane and Kevin, played by Macaulay Culkin, is their approach to handling the bad guys.

John McClane chose to shoot bad guys because they had guns and other weapons. McClane also thought it would be a great idea to toss Hans Gruber out the window on the 30th floor of Nakatomi Tower. In this case, Gruber was trying to kill his wife. Hey, sometimes you gotta do what you gotta do to say innocent people for terrorists.

Kevin on the other hand decided to torture the Wet Bandits in both Home Alone and Home Alone Two. There was plenty of opportunity for him to alert the proper authorities, meanwhile, McClane didn’t have that luxury. To make things worse, Kevin committed the shoplifting of a toothbrush in Home Alone and major credit card fraud in Home Alone 2. Kevin also tortured those dumb criminals in ways straight out of a CIA playbook.  The worst crime Kevin committed was calling his mom a dummy and living to see another day, the nerve of him. That right there should disqualify Home Alone as a holiday film in my book.

In conclusion, there is plenty of evidence that proves Die Hard is a holiday film. There should never be a question again of its holiday worthiness with the numerous holiday themes and references in the film. The only difference between Die Hard and holiday favorite Home Alone is people enjoy the violent act of torturing, shoplifting and credit card fraud over a person doing what it takes to protect innocent people from terrorists. What has this world come to?

PrevPreviousYour Post-Holiday Christmas Tree Can Be Put To Good Use
NextChecking Out The Top 10 Most-Read Stories On NCVoices.comNext