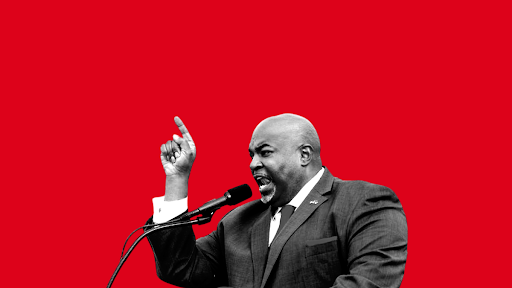 Republican Lt. Gov. Mark Robinson joined around a thousand people at Halifax Mall in downtown Raleigh on Saturday, Jan. 14, for the North Carolina Right to Life’s 25th Annual Rally and March for Life, according to The News & Observer.

This was the first March for Life here since the U.S. Supreme Court overturned Roe v. Wade last summer.

Robinson, who was the keynote speaker at the anti-choice rally, told the crowd that he believes North Carolina should be a destination state “for life” instead of abortion.

After the Supreme Court’s decision, multiple southern states passed extremely strict abortion rules, leaving North Carolina as the only state in the southeast that allows safe and legal abortions until 20 weeks.

North Carolina’s status as a safe haven for those seeking abortion care across the south will soon come to an end if Republicans in the state legislature get their way.

The NCGOP has a supermajority in the state Senate and is one seat short of having one in the House. Senate leader Phil Berger and House speaker Tim Moore have both said they plan to pass a law restricting abortion even further this year.

Berger has said that he prefers banning abortions after the first trimester. Moore said he personally supports legislation that would ban abortions after fetal cardiac activity is detected, which would be around six weeks post-fertilization and before many people know they are pregnant. Both said they’re OK with exceptions in cases of rape and incest, as well as exceptions if the mother’s life is in danger.

As for Robinson, despite the fact that he paid for his now-wife’s abortion in 1989, he believes that people should have no right to an abortion – no matter the circumstances.

Robinson previously said that once a person is pregnant – whether it was through rape, incest, or anything else – “it’s not [her] body anymore” and they should not be allowed to make the choice to terminate their pregnancy.

In reference to the abortion that he paid for, Robinson has previously said that it “was the hardest decision we have ever made. Sadly, we made the wrong one.”

Although Robinson would like everyone to believe that choosing to terminate a pregnancy is always the wrong decision and will lead to life-long regret, the facts are far different.

According to a five-year study published in the academic journal Social Science & Medicine in 2020, 95% of almost 700 women surveyed over the course of the study indicated that their abortion was the right decision and the emotion most experienced by the participants was relief.

Robinson has made it clear that he believes he should speak for all people when it comes to abortion. He has also indicated that he would like to speak for all North Carolinians by running for governor in 2024. He has yet to make an official announcement, but on Jan. 18, Democratic Attorney General Josh Stein announced he’s running.

When the lieutenant governor decides to officially declare that he’s running for governor he will (hopefully) start to face serious scrutiny from the media and voters. He has made it clear, repeatedly and often from the pulpit of a church, that he is a misogynist, an anti-Semite, despises the LGBTQ+ community, thinks women have no right to control their own body, doesn’t believe in properly educating our children, thinks America is a “Christian nation” and doesn’t support gun control measures.