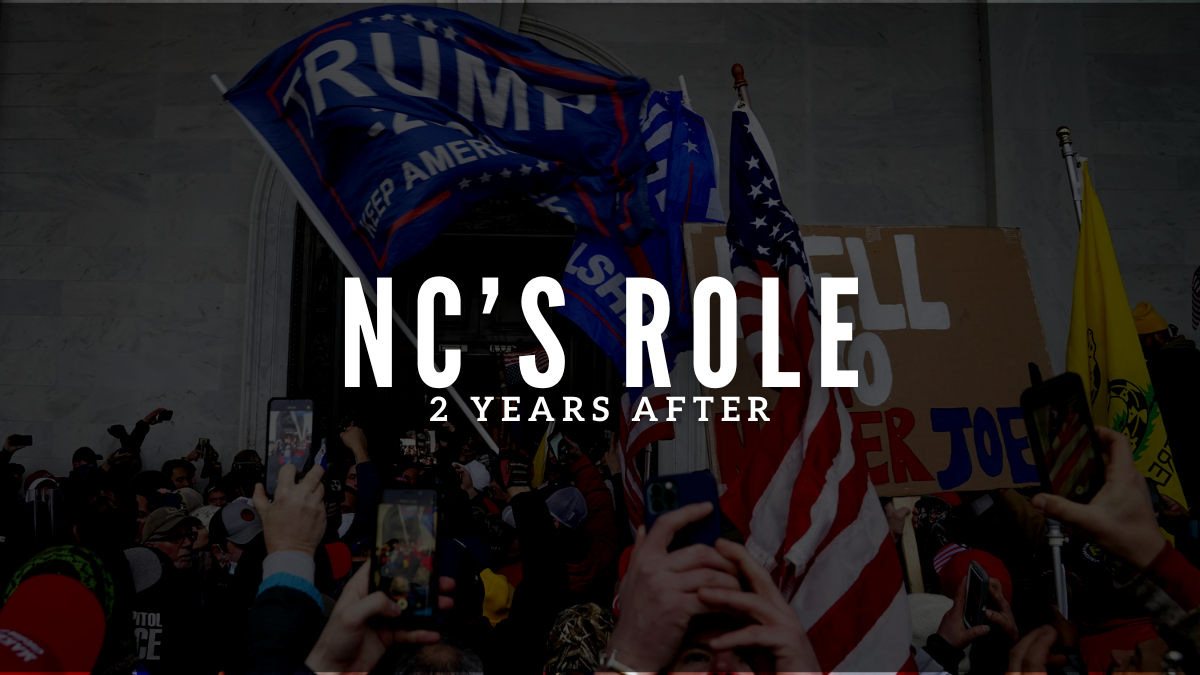 It has now been two years since the Jan. 6, 2021, insurrection at the U.S. Capitol and we’re still learning about the role North Carolina and North Carolinians played in the violent attack.

The News & Observer, citing their partners at The Charlotte Observer, reported that the list of defendants from North Carolina that are facing federal charges connected to Jan. 6 almost doubled during 2022.

Within the next few weeks, multiple North Carolinians who have been accused or convicted of crimes related to the insurrection will either be brought to trial or sentenced for their role in the attack. More North Carolina residents are expected to be arrested as the case continues to evolve.

According to The News & Observer, November and December emails from the Federal Public Defender’s Office in Charlotte looking for legal representation for Jan. 6 defendants show 700-1,200 new cases are pending across the country – most of them felonies.

In addition to those pending cases, the FBI is also still asking for the public’s help in identifying around 350 people they believe committed violent acts during the insurrection, including more than 250 who attacked police stationed outside the Capitol.

Two North Carolinians – Jeremy Bertino, of Belmont, and Charles Donohoe, of Kernersville – are expected to give insider testimony “in the ongoing sedition trial of the leaders of the Proud Boys,” according to The N&O. Both men were ranking members of the right-wing extremist militia group who helped plan and carry out the Jan. 6 attack, according to prosecutors.

Bertino and Donohoe aren’t the only North Carolina extremists working with the same government they tried to overthrow. William Todd Wilson, of Newton Grove, is an eastern North Carolina leader of the right-wing militia group the Oath Keepers and has been cooperating with the government. Group founder Stewart Rhodes and a top Florida operative have both already been convicted of seditious conspiracy.

The News & Observer spoke with Jonathan Lewis, a research fellow in the Program on Extremism at George Washington University about North Carolina’s role in the attack.

According to Lewis, North Carolina’s role as a recruiting, training and planning ground for the insurrection by the Oath Keepers and Proud Boys is unmatched by almost any state.

“Other than maybe Florida, North Carolina has played one of the most significant roles in connection to Jan. 6, not only in the terms of individuals involved but specifically individuals who held authority in these extremist organizations and who played key roles in the mobilization of these groups to the U.S. Capitol,” Lewis said.

Bertino and Wilson have pleaded guilty to seditious conspiracy, admitting they took part in their groups’ plans to stop the transfer of power from Donald Trump to Joe Biden through the use of force. Donohoe, state president of the Proud Boys and a former Marine, pleaded guilty to conspiracy.

Lewis told The N&O that in Bertino and Donohoe’s Proud Boys trial they “can both speak to a significant level of (pre-insurrection) planning. You can’t overestimate the significance of that kind of testimony … that they understand they were part of a conspiracy.”

During the past year, the number of North Carolina residents charged with federal crimes in connection with Jan. 6 went from 14 to 25. Multiple South Carolinians just over the border in York County have also been federally charged.

There are still more than a dozen felony trials of North Carolinians that are still pending. That number could grow as the investigation into the violent attack continues.

Lewis told The N&O that as the investigation continues, there are “three buckets” that defendants fall into:

“The mob-sized elephant in the room is the 12,000 to 13,000 people on the Capitol Grounds that day who because of DOJ decisions will not be charged,” Lewis said. “Beyond the arrests, there’s a far broader universe of individuals who will likely never be picked up.”

Court documents related to the militia cases contain possible North Carolina leads that investigators could decide to follow, including the dozens of Oath Keepers who took buses from North Carolina to the Capitol on Jan. 6 and the members of the heavily armed North Carolina “Quick Reaction Force” that waited at a hotel in Virginia for a call telling them to head to the Capitol.

North Carolina attorney Elizabeth Greene told The News & Observer that she believes the investigation will continue and that the Department of Justice appears “100% committed to charging and convicting everybody they can who took part in the assault on democracy.”

Greene said while some of the DOJ’s desire to charge and convict everybody they can is for accountability reasons, it’s also a warning.

“They’re sending a message,” she said, “not only to the people they are charging but to anybody contemplating similar actions in the future — if they don’t like the results of an election.”

Click here to read more from The News & Observer